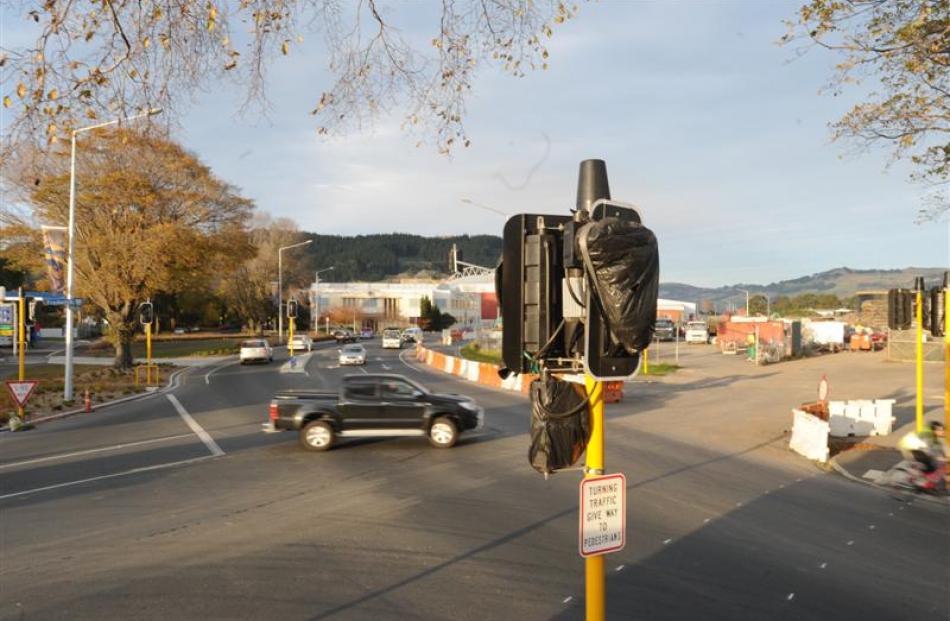 Doug Hall says he is sick of looking like the bad guy over what is happening at Anzac Ave. 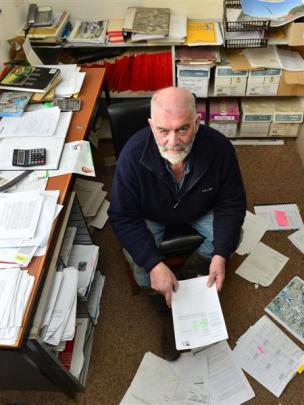 Doug Hall, who is now ''seriously considering'' running for the Dunedin City Council, sits amid some of the paperwork from his running battle with the council over his yard, which the council was to build a new road over. Photo by Peter McIntosh.

The man in the middle of a row with the Dunedin City Council over land for a new road believes he was strung along by the council so it could get the road built without him getting in its way. Debbie Porteous talks to Doug Hall about what is happening on his corner.

Doug Hall says he is sick of looking like the bad guy over what is happening at Anzac Ave.

Traffic lights at a busy intersection on the central Dunedin street have not been switched on in three years while Mr Hall and the council do battle over safety and land issues.

But the traffic lights are a small sidebar to a bigger story.

The transport operator and contractor said he only wanted to complete the transaction he was led to believe he could expect.

Instead, what he got was a council ''mistake'' that he said continued to cost him, and the ratepayer, dearly.

The history of the row goes back to 2008, when Mr Hall's yard at the corner of Anzac Ave and what was formerly Parry St was designated by the council for use for the realignment of Stage Highway 88 around the new Forsyth Barr Stadium.

Under the original designation, the council was to buy the site and a corner of a neighbouring property to build the road on.

The council originally made Mr Hall several offers of land swap/payout combinations that he did not accept.

It was then suggested by the council that his agent find him a whole new site - the agent was later paid by the council for the costs he incurred for doing so - and then the parties would get back together and negotiate.

A property was found and Mr Hall met council representatives in November 2009 to raise issues about the negotiations and inform them he was about to sign up a replacement site.

At that stage, he was told the council still wanted his site and someone would get back to him. He bought the other site.

Unbeknown to him, three days after that meeting, the council signed a deal with another landholder, allowing the road to go around Mr Hall's site.

In May 2010, Mr Hall was told the road was going around his property, but that the council still wanted his land for ''stage 2'' of the project.

In August, he learnt the council had already altered the designation. He had not been notified.

The council would later admit that had been its mistake, and it should have notified him as an affected party.

When the access to his property was closed off during the road's construction in December 10, Mr Hall started legal action against the council.

He wanted safe access and a review of the council's decision to alter the designation.

Mr Hall said he believed the ''mistake'' of not notifying him of the alteration was a deliberate move to prevent him from stopping the alteration going ahead - which he said he would have objected to, had he known about it.

He said until then he had taken the council ''at their word'' that he was still part of the plans, and had simply become resigned to the fact it was going to be a slow process.

He had not wanted to stop the road going ahead because he recognised how important the Rugby World Cup was to the city, but he was now left with properties with no legal access, or unsafe access.

The court also ordered a temporary separate and safe access arrangement be established.

Since then, both parties have been trying to negotiate a permanent solution out of court.

Council chief executive Paul Orders earlier this month told the Otago Daily Times no resolution was able to be reached, so the council would start the redesignation process.

But Mr Hall said he felt negotiations with the council ended prematurely, without even a plausible counteroffer to his offer.

He would not say how much he wanted the council to pay him out, but it is understood to be sums in the millions - enough to compensate him, including for the diminished value of his land and the financing of another site.

Mr Hall said it had been a frustrating few years that had left him stressed and angry at times.

It was particularly frustrating that the council said it decided not to buy his land because it cost too much, but he believed it had since paid more for the other land than it would have to buy his in the first place.

The council says it paid a net cost of $9.8 million for the land it acquired for the road.

It has had to pay Mr Hall about $300,000 so far through the Public Works Act and court-ordered costs, and is about to work through a publicly notified redesignation process, with the potential for a battle in the Environment Court if the designation decision is appealed.

Mr Hall said he had so far spent about $1.1 million on legal costs, specialist fees and holding costs for the other site he purchased.

He expected to incur significantly more costs as the row trundled on. He said he had gained some confidence he was on the right track.

He noted Justice Mackenzie in his 2012 costs judgement awarded 50% increased costs against the council for having contributed unnecessarily to the time and expense of the proceedings by taking steps and pursuing arguments that lacked merit.

He was also confident about a damages case after Justice Mackenzie said, given the decision to put the road there was accepted to be improperly made by the council, that Mr Hall ''may have a legal basis for claim against the council to recover, as damages, the costs [Mr Hall] incurred...''

Mr Hall's lawyer, John Farrow, said he was also of the opinion the negotiations with the council ended too soon and that going down the litigation route was a risk for council that could cost ratepayers more than a negotiated settlement.

''I query whether the cost of litigation is a justified use of our money, or whether it would have been put to better use through more negotiation.''

The council said it had a different view of the events that led to the current situation.

But operations manager Tony Avery said that had all been canvassed in court.

''We don't want to relitigate all that.''

He said the parties had been trying to negotiate a solution for three years, but were ''just so far apart'' in their positions it was clear they were never going to come to an agreed position.

The council expected to notify the requirement for designation in the next two to three weeks.

Opposing submissions were expected, he said.