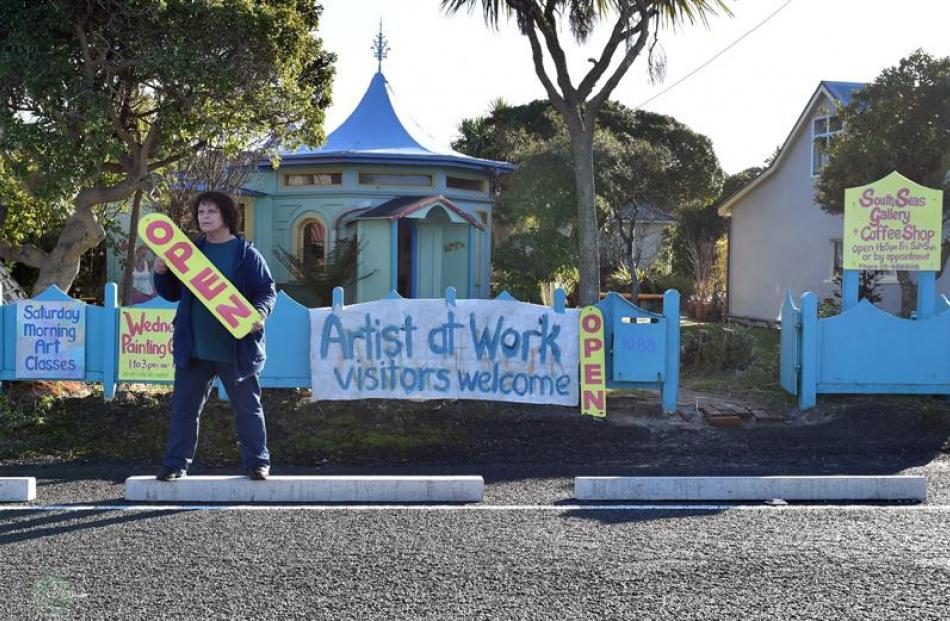 A Brighton artist says she has had no customers for seven weeks after concrete kerb blocks were placed outside her premises.

South Seas Gallery and Coffee Shop owner Janet Weir-Crooks said the Brighton Rd business used to attract between 30 and 90 customers a week, but no-one had gone through her doors since the blocks were installed.

Ms Weir-Crooks said the blocks, placed along one side of Brighton Rd to improve pedestrian safety, had made parking difficult for people driving past, and many had simply driven on.

''They clip their cars [on the blocks], they get the shakes, and they go.

Ms Weir-Crooks established the gallery with her late husband, Lindsay Crooks, 25 years ago.

She owned the property and was still paying off the mortgage.

It was used not only as a studio and gallery, but also for lessons she gave to young artists, she said.

The business was Ms Weir-Crooks' only source of income.

''This is a pivotal point right now. I can either carry on and pay my bills, or I can close down and sell, or rent it out so I can get some form of income.

''I want to keep it going - not because I make a lot of money, but because I love what I do ... and I help a lot of people get started with painting.

''This is what I've been working for my whole life. I can't imagine doing anything else.''

A meeting involving senior Dunedin City Council staff was held at the gallery last week after one of Ms Weir-Crook's students complained about the situation.

A proposed solution - removing the single block between the driveways of the gallery and a neighbouring property to allow parking space - did not sit well with Ms Weir-Crooks.

''That helps me, but it means cars will affect my neighbour's access.''

Saddle Hill board chairman Scott Weatherall, who attended the meeting, said the makeshift footpath was ''not world-class'' but was the best short-term option available within the board's budget.

Two public meetings discussing the board's pedestrian improvement programme had been held in the past few years, he said.

They were advertised publicly and attended by community members.

''We're never going to get a programme that's going to satisfy everyone's needs.

''Some residents actually said the situation was fine and they didn't want a footpath.

''We couldn't accept that. We need to ensure that younger people and people with disabilities have safe streets.''

Half appreciated the increased safety when walking on the road and half were concerned about parking and access issues.

The blocks extended for 400m and most had been in place for six to eight weeks.

Mr Harrison said movement of people and vehicles was the priority during road safety improvements, not parking space.

Removal of some blocks had been discussed with Ms Weir-Crooks last week, but the number was not specified, he said.

He rejected Ms Weir-Crooks' suggestion a footpath and parking space could fit on the existing road.

Ms Weir-Crooks' concerns would be considered on their merits, he said.

Former city councillor Colin Weatherall, who had been part of discussions on a wider project to install a fully kerbed footpath on the non-coastal side of Brighton Rd, said the project was parked as it was deemed too expensive.

He had spoken on behalf of Ms Weir-Crooks at a meeting on that proposal in 2006, as she was not able to attend.

Ms Weir-Crooks said she had not attended subsequent meetings, as she believed she would continue to be represented.

Mr Weatherall, a Brighton Rd resident, said the kerb blocks were a positive development in improving the road.

''It's not the most ideal solution but it's certainly a hell of a good step in the right direction to support safety on the road.