Gardens joined by accord 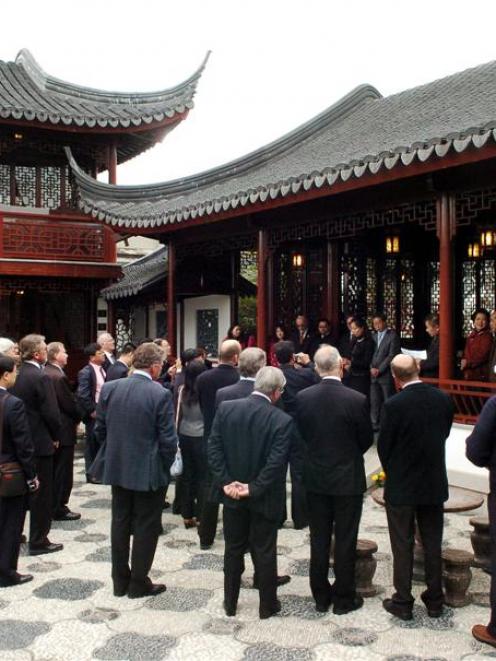 The 16-member Shanghai delegation and invited guests listen to speeches at yesterday's memorandum of understanding ceremony at the Dunedin Chinese Garden. Photo by Gerard O'Brien.
Shanghai, Dunedin's sister city, now has a special relationship with the city's fledgling Chinese Garden.

A memorandum of understanding was signed in Dunedin yesterday between Dunedin's 20-month-old garden and Shanghai's 450-year-old Yu garden, in the Huangpu district.

A 16-member party, the largest delegation from Shanghai to visit Dunedin, attended the signing at the southern garden.

Addressing the ceremony through an interpreter, delegation leader Feng Guoqin, chairman of the Chinese Peoples' Political Consultative Conference, said he felt at home as soon as he saw the gates of the Dunedin Chinese Garden.

It was the finest Chinese garden he had visited in a sister city.

He liked the "harmony" of the garden; using local grasses and materials meant it was a "good combination" of China and New Zealand.

Mr Chin thanked the delegation for making time for the visit.

The garden relationship, which was initiated by Shanghai, means Dunedin will be able to get advice on planting and other aspects, such as the correct placing of cultural artefacts.

Dunedin City Council chief executive Jim Harland said he had been impressed by the Yu garden on his three visits, and looked forward to visiting again in May.

Chinese gardens were special places and a sanctuary from the pressures of everyday life.

With centuries of experience, Yu had a lot it could teach Dunedin's "very young" garden.