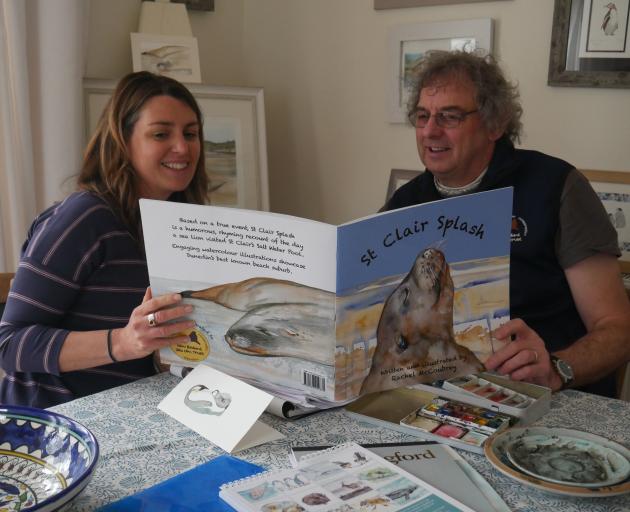 The sea lion stunned staff and swimmers when it waddled through the automatic doors, past the reception area and into the swimming pool.

"I was really gutted I missed it,'' Mrs McCoubrey, who lives in St Clair, said.

"I watched it on YouTube and thought it was hilarious.''

She combined her background in primary school teaching and passion for watercolour art to create the book.

"It was really initially about the painting but now I'm feeling like I am moving into the writing, which is really exciting.''

The initial idea for the story came to her one night when she could not sleep, so she got up, wrote it all down and then worked at refining it later.

"True stories I really think are the best stories,'' she said.

Since the book was released at the start of the year, she has visited kindergartens and primary schools to read it to children.

She also takes the opportunity to talk about the endangered sea lions and donates $1 for every copy sold to the New Zealand Sea Lion Trust.

Trust chairman Steve Broni said it was "very generous'' of her to offer the $1 donation and it symbolised a synergy between art and science.

"If you want to engage people in supporting protection you have got to talk to their emotions, and that's what the arts do.''

Mrs McCoubrey's next book, Turkey on the Loose, is based on the turkey that "terrorised'' St Clair residents last year.

The book launch will be held next month.