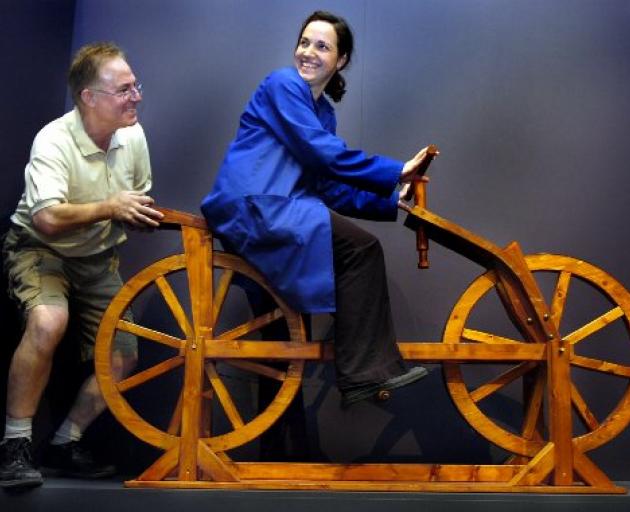 Exhibition manager Luigi Rizzo and exhibition designer Michelle Michael set up the museum's da Vinci exhibit. Photo by Jane Dawber
The vision of one the world's greatest geniuses will encounter the land of No 8 wire inventors at the Otago Museum in Dunedin this weekend.

The Da Vinci Machines is a world-class exhibition from the Museum of Leonardo da Vinci, in Florence, Italy, and features da Vinci's engineering genius, in the form of 60 highly accurate model reproductions and hands-on exhibits.

The paid-entry show, which opens to the public on Saturday, invites visitors to explore some of the greatest works and discoveries known to mankind, including military, flight, hydraulic, mechanical and architectural innovations.

Leonardo da Vinci (1452-1519) is considered one of the most diversely talented people to have lived - a ‘‘universal genius'' or archetypal ‘‘Renaissance man''.

He painted two of the world's most famous paintings - Mona Lisa and The Last Supper - and is also widely hailed as a visionary scientist, mathematician, engineer, inventor, anatomist, sculptor, botanist, musician and writer.

‘‘We certainly do have a wonderful background of that.''

She expected the exhibition would have wide appeal to visitors, bringing them face-to-face with the works of a master inventor.

‘‘It's an incredible opportunity to see the works of a genius,'' she said.

She hoped about 20,000 people would view the internationally-acclaimed collection of authentic models of da Vinci inventions, which will be displayed at the museum until June 15.