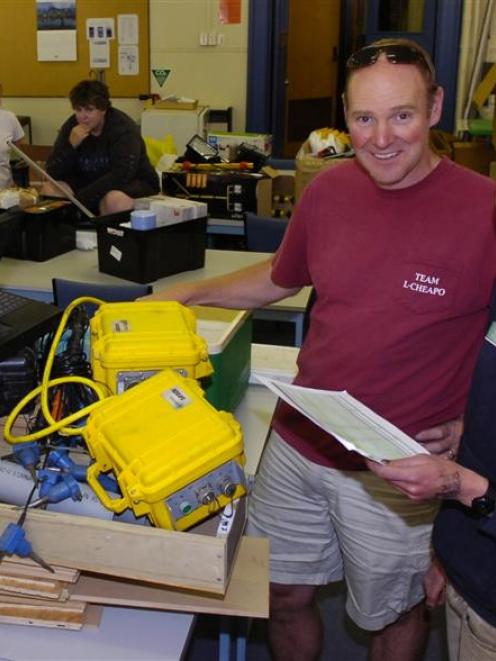 University of Otago geologists Dr Andrew Gorman and Dr Virginia Toy (front), pictured with two portable seismographs, are getting ready for a research field trip, as are geology students Betina Fleming (rear left) and Hannah Scott. Photo by Jane Dawber.
University of Otago geologists are preparing to take part in an international research project which may help clarify the likelihood and effects of a future massive earthquake on the Alpine Fault.

The Alpine Fault is a major tectonic plate-bounding fault that is expected to fail in large earthquakes every 200 to 400 years.

Preparations for drilling are expected to start on January 24 at Gaunt Creek, near Whataroa.

Dr Toy said that several senior Otago researchers and research students would be involved in drill-core-sample recovery and logging during the first phase of the planned drilling-related research, known as DFDP-1, this summer.

Otago is dealing with the collection and logging all of the core samples from the drill hole and with on-site logistics.

Dr Gorman is also co-ordinating a seismic surveying project involving collaboration with scientists from Canterbury and Auckland universities, the Victoria University of Wellington, GNS Science, the University of Alberta, Canada and the Technical University of Freiburg, in Germany.

Dr Gorman is co-ordinating a group of about 30 researchers, including a sizeable group from Otago, which will undertake seismic experiments, using explosives, along a 6.5km-long section of the Whataroa Valley, to gain a clearer picture of the fault structure to a depth of up to 5km.

A total of 26 portable seismographs, most of them from abroad, will be deployed during the research.

Determining the Alpine Fault zone structure well below the earth's surface was "crucial for understanding not only what conditions govern earthquake rupture" but also how ongoing faulting produced mountain ranges such as the Southern Alps, he said.