After pounding the ground with a hammer to create mini earthquakes in Dunedin yesterday you could also try some old-fashioned panning for gold.

Alyssa Hitchcock (14) and Alice Barrett (15), both of Kaikorai Valley College, were among 40 pupils from the college and Logan Park School who took part in an outreach programme organised by the University of Otago geology department.

"It’s fun," Alyssa said about the gold panning, undertaken near the department’s building on campus.

"It’s good so far" was the comment from Alice.

However, the ground-striking hammer work had also appealed during yesterday’s sessions, which began at 9.30am, they said. 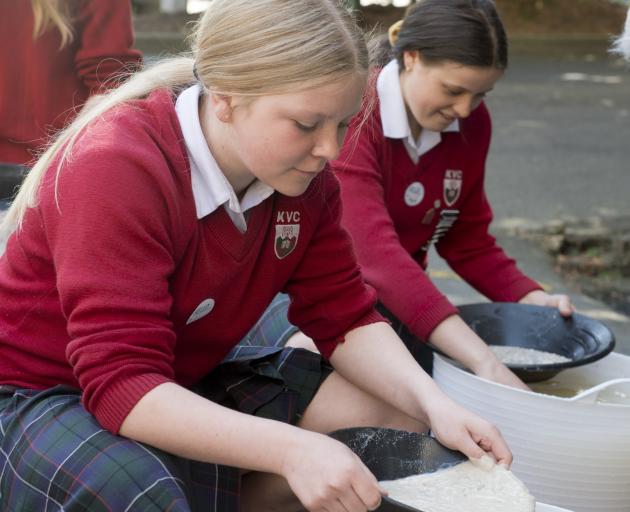 Alice Barrett (left) and Alyssa Hitchcock, both year 10 pupils at Kaikorai Valley College, pan for gold during an outreach session at the University of Otago yesterday. PHOTO: GERARD O’BRIEN

Geologist Associate Prof James Scott said the outreach was the first of its kind organised by the department and was likely to become an annual event.

Yesterday’s fun activities aimed to alert school pupils to the wide range and variety of work done by geologists.

"We’re not just studying rocks in the mountains," he said.

Many researchers in the department were studying climate change, a key international challenge.

Some other scientists were investigating earthquake risks, he said.

During yesterday’s earthquake simulation, the ground shaking was monitored using a smartphone app.

The mass of gold was much greater than that of quartz, which was why gold panning worked, but panners had to work vigorously to separate the gold, and leave it at the bottom of the pan.

Other activities included excavating the palaeontology of limestone from North Otago, and landscape modelling using an augmented reality sandbox, he said.