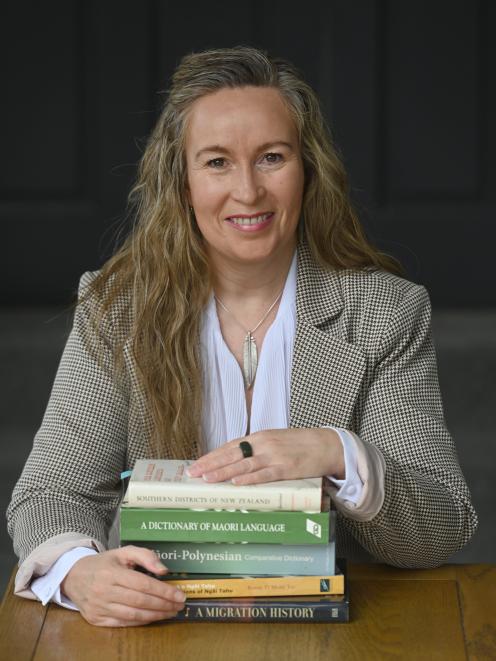 Sitting with a pile of te reo textbooks is Ngai Tahu Kotahi Mano Kaika tumu-manager Paulette Tamati-Elliffe, in Dunedin on Friday. PHOTO: LINDA ROBERTSON
Putting aside fear of getting it wrong and giving it a go is all part of Te Wiki o te Reo Māori, says a Dunedin proponent.

The week was first held in 1975 and has been growing in popularity since.

Ms Tamati-Elliffe said Te Wiki o te Reo Māori was a time to celebrate and shine a light on the language.

There were more resources available than ever before, many of which could be accessed online, which was great at a time when Alert Level 2 might put a damper on the more usual face-to-face celebrations.

People could still use the week to practise their skills and learn more, and taking part in the national Māori Language Moment was a great way to do that as part of a bigger group.

Hundreds of thousands of people across the country have signed up for the moment, a one-minute period starting at noon tomorrow when participants would exercise te reo in any way they knew how, whether it be singing along to a waiata or using a te reo proverb.

While having a week dedicated to the language was great, it was important people used it to create more opportunities to keep developing their skills and appreciation for te reo outside of the week, she said.

Te reo was not a living language anymore and it would take a lot of effort to get to a level where it could sustain itself.

"It is not just enough to have greetings."

Otago Girls’ High School te reo Māori teacher and head of Māori performing arts Mac Te Ngahue said there had been a steady increase in te reo use since the week was introduced.

It was an opportunity for everyone to learn more about the language and help normalise it.

Te reo was one the official languages of the country and was therefore on equal footing to English, and New Zealand Sign Language.

It had been great to see pupils becoming more engaged in te reo over the years and there had been a real hunger among pupils to learn more, he said.

Carisbrook School principal Katrina Munro said those in a teaching profession had an obligation to bring pupils along on the journey to learn te reo.

It was important that teachers led by example and put effort into normalising use of te reo.

Pupils would join in a school-wide waiata each day this week, which would be played through the intercom system.

They would also be participating in language-based challenges throughout the week.