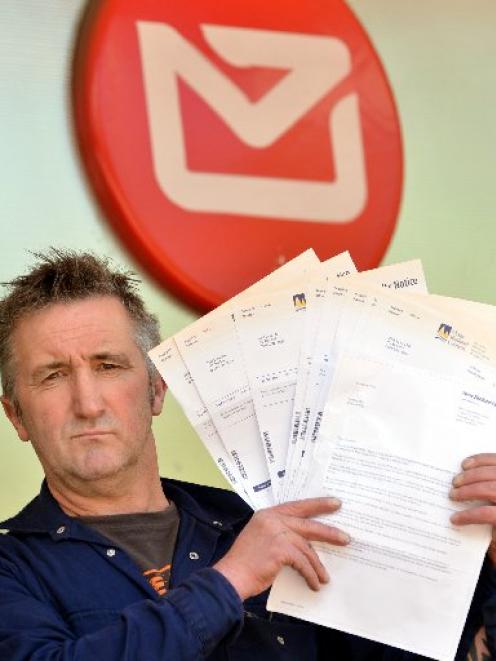 Dunedin businessman Lawrie Forbes is angry with the Otago Regional Council and New Zealand Post after being charged late fees for rates he posted before the council's due date. Photo by Peter McIntosh.
A Dunedin businessman is ''gobsmacked'' after the Otago Regional Council charged him $500 in late fees, even though he sent his rates payments before the due date.

Lawrie Forbes is also angry with New Zealand Post for failing to deliver two letters containing the payments sent from the post box in the Exchange on October 30 to the council's PO box in the same building by the due date the next day.

By charging him late fees on his nine business properties, the council was being pedantic, Mr Forbes, who received the late notices yesterday, said.

''I am just sort of gobsmacked, because I have got up towards [$500] of penalties for something as far as I was concerned was a New Zealand Post issue.''

Other organisations, such as IRD, took a ''common-sense'' approach and did not charge late fees for payments sent before the due date, even if they arrived late.

The council needed to realise ratepayers were customers and treat them appropriately.

'' I don't beat my customers up when their cheques are late coming, because I know that it's New Zealand Post [at fault].''

The length of time it took to deliver the letter was an example of how New Zealand Post's service had declined in recent times, he said.

He had a simple message for both organisations.

''C'mon New Zealand Post. Be honest about your services, and c'mon regional council, stop being a bunch of .. Nazis.''

Council finance manager Stuart Lanham said its policy was that payments must reach the council by the due date, which was ''clearly stated'' on the back of its rates assessments.

''In practice, we allow a couple of days' grace just for things that might have been posted right on the deadline,'' Mr Lanham said.

However, Mr Forbes' payments did not reach the council until November 5, which was the date at which the council started charging late fees.

People who left payments to the last minute could pay by direct debit, which went through immediately.

There had been a small rise in the number of late notices this year, which may have been influenced by New Zealand Post taking longer to deliver its mail.

A New Zealand Post spokesman said the company terminated its target of delivering standard (non-fastpost) letters ''across town'' by the next working day on October 7.

It now had a delivery target of three working days.