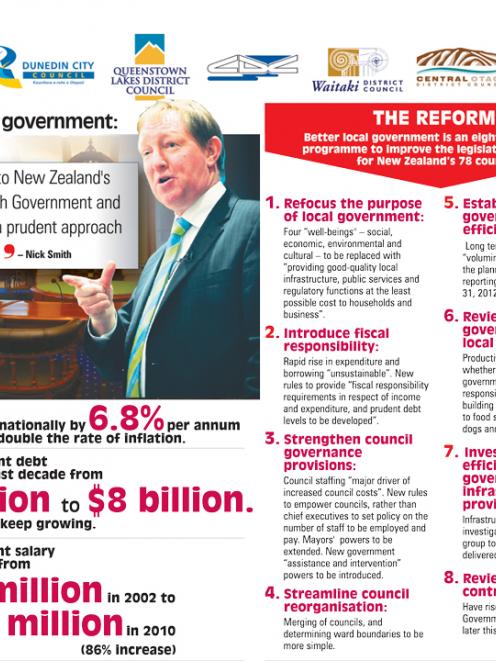 Proposed Government changes to New Zealand's councils have been described as "profound", driven by ideology and set up to be rushed through before adequate discussion can take place.

But Dunedin Mayor Dave Cull said "the devil is in the detail", and he was not concerned about the reforms.

"I suspect in the long term it won't be a ground-shifting change."

Dr Smith said the Government was "rebalancing" the New Zealand economy away from the increased public spending and debt of the previous decade.

The first four of eight initiatives would be introduced to Parliament in May, to be passed in September.

Councils from around the lower South Island will meet Dr Smith in Dunedin today.

But there were "a number of debates" around those issues, and a number of ideological issues in what Dr Smith was doing that needed to be fully considered by local governments and the public.

"I don't think the time is there to do that.

"We've seen that speed of reform before. It never ends well," she said.

The Government appeared to be looking at local government just in terms of efficiencies.

She said dropping "social, economic, environmental and cultural well-being" from the Act, and replacing it with "providing good quality local infrastructure, public services and regulatory functions at the least possible cost to households and business" meant there was no explicit requirement for councils to fund activities such as theatres, brass bands and a wide variety of other community groups.

Local government and the public needed time to consider what that meant.

"This is a really profound change."

In Auckland, Mayor Len Brown also questioned what could be lost with the reforms, saying it would not be acceptable if the changes meant a council had to stop plans concerning social activities, or aspects of the city such as roading or public transport.

Mr Cull said dropping the four "well-being" aspects of the Act would not necessarily mean social activities and community groups' funding would be dropped by councils.

Instead, the Government and councils would need to work through what councils were responsible for.

The Government's objective of increasing efficiency, and limiting debt and rates increases, which Dunedin was already trying to do, was "laudable".

"It's an attempt to achieve efficiency and constrain unnecessary expenditure.

On plans under the reforms to make councils, rather than chief executives, responsible for staff remuneration, he said councils already had "a fair bit" of control over the matter.

The increase in mayoral powers, Dr Smith's reforms said, would extend powers to mayors to appoint deputy mayors, establish committees and appoint their chairmen and women, and propose plans and budgets.

Mr Cull said the changes were not "hugely different", but a more efficient way of doing things.

Local Government New Zealand president Lawrence Yule said LGNZ was broadly supportive of the proposals, but its focus would be on ensuring councils answered to communities, not the Government.

He was pleased the Government was committed to ensuring the local government sector was involved in the process through representation from LGNZ in the reform process.