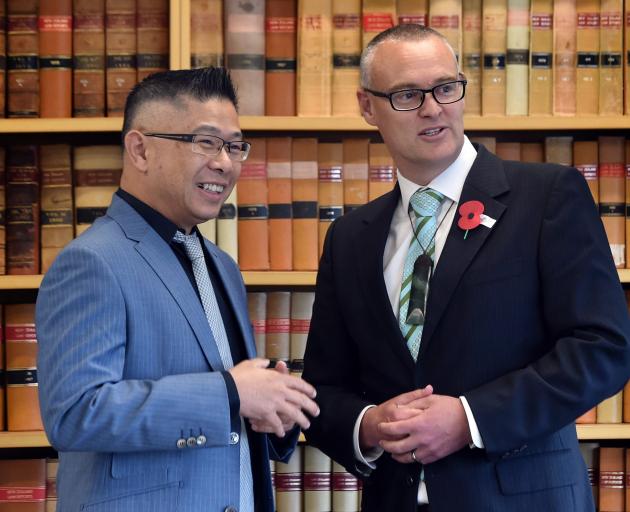 Digital Council for Aotearoa New Zealand chairman Mitchell Pham (left) and Digital Economy and Communications Minister David Clark discuss how to keep humans at the centre of a society that increasingly uses computers to make decisions, at the launch of the council’s new report into the matter at the University of Otago yesterday. PHOTO: PETER MCINTOSH
The Government is taking advice on how to keep people at the centre of society as computer algorithms make increasingly more decisions about people’s lives.

As New Zealand becomes ever-more digital, a seven-member council has been created to make sure the technology that shapes society is used to build a more equitable and inclusive country.

Dr Clark said the Government supported in principle all seven of the report’s recommendations about how to make sure automated decision-making was trustworthy.

Data was already seen as the world’s most valuable commodity, Dr Clark said.

Also, diversifying the economy towards high-value, low-carbon products was essential, he said.

"However, this can’t be achieved without building trust in the way we use and share data," he said.

The report, published yesterday, said computer algorithms were not only determining what people saw in their social media feeds, but were also used in decisions about visa applications, hospital waiting lists, and parole.

Council chairman Mitchell Pham, of Auckland, said people wanted a human-centred approach and that "trustworthiness" of automated decision-making was an ongoing concern.

Algorithms were never right the first time, he said.

And the only way they got better was through use in the real world.

Talking to the people who could be affected by the decisions computers were making would help to make sure decision-making kept some "human-centredness".

The new technologies were just a means to an end, he said.

"And that end has to serve us humans," Mr Pham said.

"This is a real opportunity for us to actually get things right."

building a diverse digital workforce; and

increasing the digital skills and knowledge of public sector leaders.