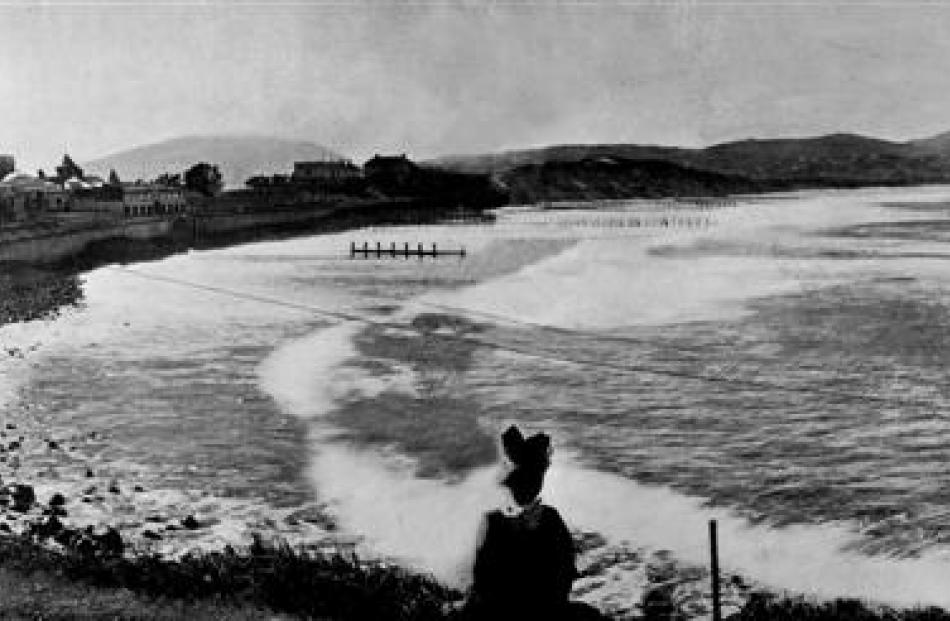 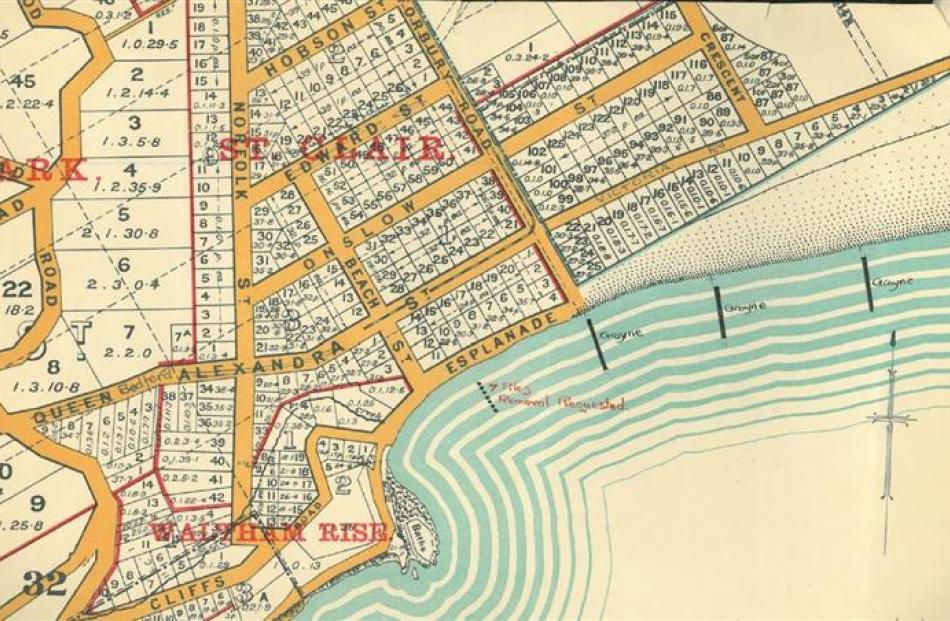 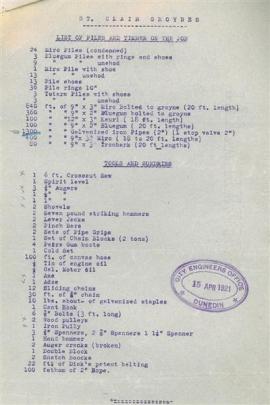 A 1921 list of timber, tools and sundries for work on the double-row groynes.

The last of the 1921 double-row groynes as they stood at St Clair this week, with the sea lion sculpture of ''Mum'' in the foreground. Photo by Stephen Jaquiery

St Clair's erosion has been a problem for well over a hundred years. But by 1919 the solution seemed obvious - the wooden groynes now known as the St Clair piles were the answer. Almost a century later there's no sign of new groynes being built. Why not?

As what could be the piles' final summer approaches, reporter Craig Borley concludes an Otago Daily Times investigation into the piles, their purpose and whether they will rise again.

By 1919 Dunedin had been manhandling the Flat - and Ocean Beach- for 70 years, leaving them almost unrecognisable from their natural form.

The Flat - a vast swamp a metre below sea level, home to two ocean-fed lagoons.

And Ocean Beach, bookended by the same rocky points it is today but along its length broken by two estuaries, inlets to the lagoons beyond.

But Dunedin wanted flat land for farming, higher land for building, an esplanade for walking and a sandy beach for bathing.

And in 1919, it seemed that the missing link to having all those things coalesce while keeping the sea at bay was a new set of groynes.

A new set were planned, the old ones would be repaired, and the erosion problems would end once and for all.

It's early 1920 and Mr Furkert's assertions have been accepted - new groynes will be built, the old ones repaired.

But trouble is brewing. Work is expected to be done over the 1919-20 summer, but the government fails to authorise it and tenders can't be obtained.

Dunedin's city engineer, Mr W. D. R. McCurdie, in a progress report written for Dunedin City Council, says ''the whole long summer has slipped away in one delay after another''.

No government sign-off, no tendering, no progress.

Despite that, a May 28, 1920 report shows piles had been ordered anyway, and were expected to be delivered by mid-June.

But there is no way the groynes can be built to their original plans in winter seas, no different then from what they are today.

A solution is required, and Mr McCurdie proposes one: build the groynes as double rows, build a path above them and sit a pile driver on the path - above the wave level.

A letter from the Dunedin City Council to the Minister of Public Works begs for immediate assistance.

''The sea front is now wholly awash at high water, and the sea is battering the natural sand-hill barrier with tremendous force.''

June 4, 1920, and a report to the council states that, in desperation, ''860 loads of rock and 20 loads of scrub'' has been dumped along the base of St Clair's sand dunes to protect against the sea.

The letter also advises construction of the new groynes will begin ''in about 10 days'', despite stormy weather ''that may come at any time and wreck the whole coast''.

Double-row groynes are confirmed as the solution and ''the work of driving them to be done from staging on the tops of the piles''.

The first groyne is to be built from the Forbury Rd point of the beach.

The council agrees to the plan and tries to provide the required 3000 cost.

Work begins that day. Five men, on loan from the Harbour Board, are drafted in and a friction winch procured.

A tramway is built to transport the piles from land to the end of the groyne, where they are sunk using a water jet.

By January 21, 1921, Mr McCurdie reports the third groyne is complete, stretching 55m. Planking is being added.

But just two months later, the groynes are looking less promising than ever.

Sand is not accumulating as planned. Deep water is now ''so close inshore along the whole beach that groyne work is almost certain to be destroyed''.

In stark contrast to the advice given by Mr Furkert a few years earlier, Mr McCurdie suggests a rock barrier be built to protect the foot of the sand hill, and a structure be built ''into the coastal current''.

It's the only way a sandy St Clair can be achieved, Mr McCurdie says.

By April the groyne work is completed, along with a rock barrier along the dune's base.

All piles have been driven in, using miro, blue gum, totara and kauri.

The last of those three new double-row groynes is ''our'' St Clair piles.

But the sand refuses to stay.

''The problem becomes graver every day as the deepening of the water off shore goes on causing the rollers to break with increasing violence along the high water mark,'' Mr McCurdie reports.

Such is the extent of Mr McCurdie's concerns he suggests opening a quarry at Second Beach ''for obtaining stone more cheaply''.

Finally success - June 21 and sand has returned to St Clair.

But it wasn't the groynes' doing - a change in weather meant sand had returned to such an extent that some of the groynes' planking had been covered.

''In front of the Esplanade there is a sandy beach.''

A proposal to fill the gap between the two rows of piles on the Forbury Rd groyne with rock is investigated, but not acted on.

By 1924 the groynes are being spoken of in a new tone.

They are a hazard, the St Clair Life Saving Club says.

The club requests the removal of seven piles from one of the original 1902 groynes, in front of today's off-street Esplanade car park.

It's unclear whether the removal takes place, but the new tack continues.

In 1935 the club again seeks permission to remove ''piles for one groyne''.

That removal does take place.

The Ocean Beach Domain Board (OBDB) requests government funding to repair the 1921 groynes.

But the government suggests the board use its own funds, stating no maintenance has been performed on the groynes since their construction, leading to most of the planking disappearing.

The following month, urgent construction of temporary works to protect St Clair is proposed and accepted, because of ''the serious inroads of the sea''.

Two years later and the Otago branch of the New Zealand Surf Life Saving Association is again discussing ''the subject of the danger of the piles on the St Clair portion of Ocean Beach to bathers and life savers''.

''As far as we are able to judge after carefully watching the action of the sea, these piles serve no useful purpose and are in fact a menace to the people bathing in their vicinity.''

While nobody has been seriously injured because of the piles, ''on two occasions canoes with men on board have been swept against the piles and smashed beyond repair. The crews of the canoes were extremely fortunate in escaping.''

The association's October 20, 1938 letter to the OBDB confirms one groyne had so far been removed, but ''we now ask if you would be good enough to have the others taken out or cut off below the sand level''.

As the ''surfing season'' was quickly approaching, it was requested the matter be treated as ''URGENT!''.

The board, responding the next week, is ''not agreeable to the removal of any of these piles''.

But that resistance does not last.

On January 24, 1939, the surf life-savers again request the piles' removal. This time the domain board agrees, as long as the ''tops of the piles are finished off level and that no ragged stumps or ends are left''.

Our archive search ends in 1955, and nothing much has changed since the 1930s.

St Clair makes the ODT's front page five times between April and June of 1955 as the annual heavy seas roll in.

Correspondence between the Marine Department and the OBDB highlights the concern.

The board's marine engineer, C. W. O. Turner, in a report to the ministry, notes while erosion has been less of a concern in the preceding 15 years, over the last century it has been a constant in the area.

Easterly seas bring it back, but another series of southerly storms and it's gone again, exposing the land beyond.

By this stage all of the beach's groynes have been ''destroyed or removed'', except for two ''north of the end of the Esplanade, leaving only the rows of piles standing, one of these being only about two-thirds the original length''.

One of these remaining groynes is ''our'' St Clair piles - a remnant from 1921 and still standing in 1955 when the city again turns to groynes to help repair St Clair beach.

Reconstruction of those two groynes' planking ''is in progress and should suffice to check erosion at this point and build up the beach'', the report says.

But the long-term answer, Mr Turner suggests, is to rebuild the groynes as ''five or six rock-mound groynes about 50 feet in length when the beach is low to reduce the scouring sweep of water along the beach''.

Groynes have proven over the previous 50 years to have been the most successful method of controlling St Clair's sand loss, Mr Turner says, and should be built again.

But those rock groynes were never built, and today all that remains of 113 years of St Clair groynes are the two dozen or so piles still standing.

Their worth has ebbed and flowed over the decades.

And it's likely they'll be remembered more for their photogenic nature in their twilight years than for the job they were built to do, as it seems no further groynes will be built at the beach.