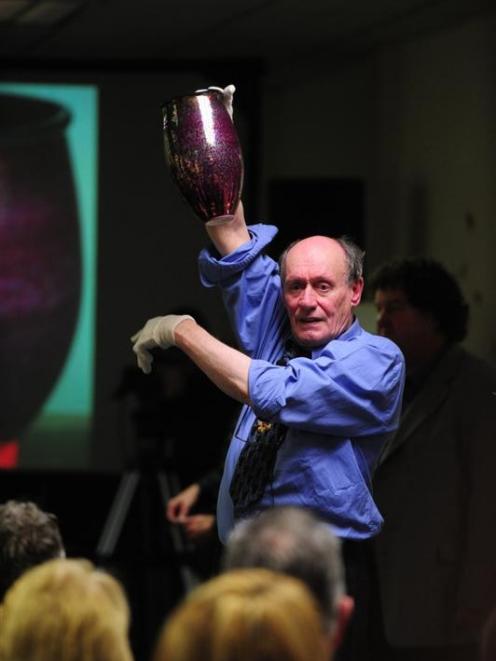 In what might be described as the antique equivalent of a garage sale, the couple put up for auction the things they won't be taking with them.

Three auctioneers, including Auckland-based son Ben, spent half of yesterday disposing of the 867 lots in what was billed as the South Island's antique event of the year.

Some items were the remains of stock from the Plumblys' Princes St antique shop and some was from their own collection.

Sitting out the back doing the auction paperwork, Mr Plumbly paused briefly to lament the sale of two items.

"There's a lovely big old figure of an owl I've owned for years and there's a wax head of Roosevelt that belonged to my father that the family doesn't particularly want. So they are going to have to go where they are wanted."

Mr Plumbly, originally from Tunbridge Wells, England, began in the antique business in November 1972, when he set up a shop at the Gardens Corner in North Dunedin.

In the 1980s, he became one of the best-known faces in Dunedin as the antique expert on the television programme Antiques for Love or Money alongside Dougal Stevenson and Marshall Seifert.

Mr Stevenson yesterday said Mr Plumbly had an affection for craftsmanship and his move to Auckland was a little like the city losing an artefact.

Mrs Plumbly will continue in the antique book trade while Mr Plumbly, who has been involved in many charity auctions, will continue to do voluntary work for a couple of organisations.

Mr Plumbly said he had mixed emotions about the move to Auckland, where he plans to spend more time with his two young grandsons.

"There is a touch of sadness about it. I'm very fond of Dunedin. It's been very good to me. But you've got to go where your family is."

Top price in the first session, featuring smaller objects and curios, was $1025, paid for a Georgian period pocket compass.