Hard times not end of good times for drinkers 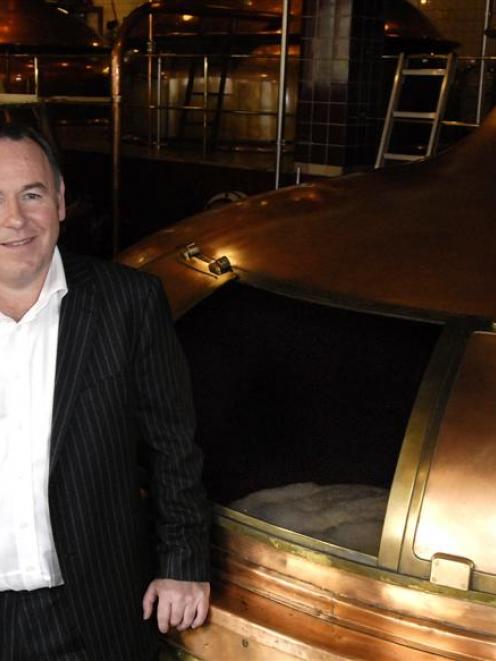 Lion Breweries managing director Peter Kean inspects the product at the Speight's Brewery in Dunedin on Thursday. Photo by Gregor Richardson.
The prospect of a global financial meltdown might be enough to drive you to drink - and it could be doing just that to many.

Lion Breweries managing director Peter Kean, speaking during a visit to Dunedin on Thursday, said the industry was facing numerous challenges, but a diminishing of the old desire to "have a few jars" did not appear to be one of them.

On the contrary, while the economic indicators turned red the world over, sales figures for the alcohol business had increased slightly in recent weeks, he said.

It appeared those who fancied an tipple might switch to cheaper brands as belts were tightened, but few were willing to go without completely, he said.

"There's an old adage that alcohol is recession-proof, and I think you might be seeing a bit of that now.

"We can't push that too much, but it's one of those luxuries people don't give up. They don't generally give up having a beer or wine," Mr Kean said.

The trend was reflected in recent survey results, which showed 96% of New Zealanders had visited a licensed premises in the past two years, and "about half" of those surveyed would not change their drinking habits during an economic downturn, he said.

The company's "tightest" month was August as economic woes emerged, but sales in September and October had "bounced back nicely", he said. Better weather and the end of the Olympic Games in China - which kept more people indoors glued to television screens - had helped.

Mr Kean - a former Dunedin man - was back in his hometown on Thursday to give a keynote address at the Hospitality Association of New Zealand's annual conference and trade expo.

He planned to head inland with his wife Judy to visit his 90-year-old mother in Central Otago before returning to Auckland today.

Mr Kean has worked for Lion since 1986, rising from sales representative at Speight's Brewery through 10 roles in Auckland, Christchurch and Dunedin to his present Auckland-based post.

The company employed about 1000 workers nationwide and supplied about 300 products, including Dunedin's Speight's brand, other beers, wines and spirits, to "almost all" of New Zealand's 14,000 licensed venues, he said.

The company had diversified in recent years, moving away from a strict diet of beer brands to include wines and spirits, and had also identified a new emerging market in older, more mature drinkers this year, he said.

Empty-nesters flush with disposable income were living longer and enjoying their health, while experimenting with travel and new tastes, he believed.

The key to securing the company's markets was to innovate in every area - from marketing, such as last year's massively successful Speight's Great Beer Delivery to London, to new products, such as Steinlager Pure and Speight's Summit, as well as safe venues for customers.

"The biggest threat I think we have got isn't recession, it's complacency with our outlets or our brand."

The company was also eyeing markets abroad, including the United States and United Kingdom, where it planned to build its first overseas Speight's Alehouse next year, he said.

The temporary pub delivered by ship during last year's Great Beer Delivery had been replaced by a larger temporary venue, the Southerner, near Fleet St in the heart of London, which could accommodate up to 80 people at a time.

An announcement on plans for a permanent London Speight's Alehouse was expected late this year or early next year, he said.

And the next port of call for the pub chain could be a lot closer to home, Mr Kean said.

"We have had requests from different parts of Australia, and the United States," he said. "We want to do the first one 110% right, but if we get that right who knows?

"There's lots of Kiwis in Australia."