Harrison is on the road to recovery 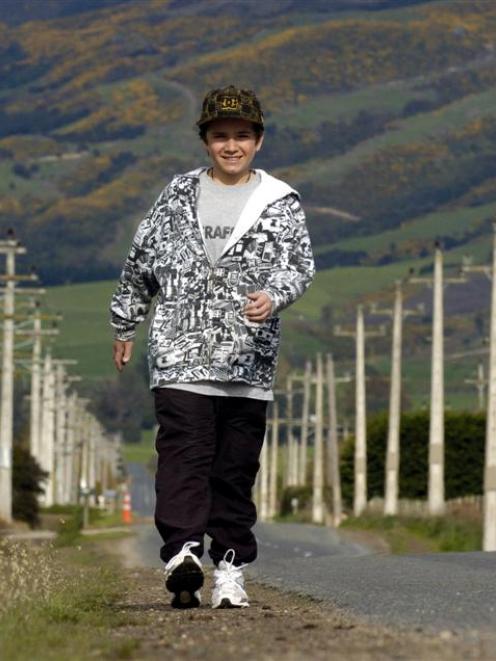 Harrison Kemp steps out on Maungatua Rd near Outram in preparation for his 10km trek in the area on Sunday. Photo by Gerard O'Brien.
Ten months ago, Harrison Kemp was in a critical condition in Dunedin Hospital with leg injuries.

Today, he is preparing to walk 10km to raise money for those who helped save his life.

For his parents, Gail and Jonathan, the Hill City Athletic Club hill-free half marathon and 10km run and walk on Sunday, on the Taieri Plain, is the "grand finale" to the painful times the family has gone through since Harrison (13) was injured in a car crash in St Kilda, in Dunedin, in January.

He and a friend were thrown from the boot of a car, with Harrison sustaining cuts to his head and face, and shattering his left leg.

His friend, Simon Charlton, was killed.

Harrison's leg had to be pinned and plated, and he was in a wheelchair for nearly six months.

He is now able to contemplate doing the walk, thanks to physiotherapy two or three times a week, and taking the family dog for walks.

The family decided to get sponsors for the walk so Harrison could raise money for the hospital's children's ward.

It was an easy decision, he said, because the hospital staff "saved my life".

He would be accompanied on the walk by his mother and father and some friends.

Mrs Kemp said while they did not know if they would make it to the end, they thought it was a fitting end or "grand finale" to the story.

"He's been going hard out at physio and is pretty much back to normal."

Mr Kemp said it would be good to raise money to give back to the hospital which had helped Harrison so much.

Harrison has one more operation at the end of the year to remove the plates.