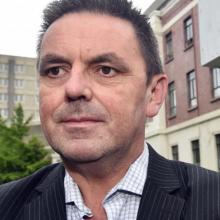 Chris Fleming. Photo: ODT files
A slight increase in population projections for Southern District Health Board’s area should result in an increase in board funding, but the exact impact is not yet known.

That was the message from board chief executive Chris Fleming at the board’s monthly meeting this week in Invercargill. He said the board population projections had risen by about 2.65% or 8910 people for next financial year.

Mr Fleming said there were signs that the board might get "a more favourable outcome" on funding but the board would have to wait for the Budget and more information to come out.

Boards’ funding envelopes, showing allocations for next financial year, are not likely to be received until after the May Budget.

The outcome of the review of the health and disability system being carried by the panel led by Heather Simpson could also have an impact. It is expected at the end of this month.

The population projections are used for the population-based funding formula (PBFF) which is used to allocate most of district health boards’ funding.

The aim of the PBFF is to equitably distribute available funding between DHBs according to the relative needs of their populations and the cost of providing health and disability support services to meet those needs.

Weighting is given for age, sex, ethnicity and deprivation within board populations and there are also adjusters for unmet need, rural location and for delivering services to overseas patients and refugees.

The formula is poorly understood and in the past Southern has raised concerns about the fairness of the funding, particularly with regard to its rural quality.

The latest projections show only 0.15% increase in population across the country, but the estimates may be controversial, particularly for Auckland DHB, which is showing an almost 11% fall in population (60,640 people).

Mr Fleming pointed out that the changes might not necessarily reflect increases or decreases in actual population but rather changes from the projections.

The changes did not influence the "size of the pie", but the distribution of that. With large changes to projections affecting income, transitional funding may be given to ease the adjustment.

The formula worked at the macro population level and it was difficult to drill down to community level and say that there was a certain amount which should be spent in any particular area. That did not take into account that tertiary services for that community might be provided elsewhere.

The PBFF was responsible for about 90% of board revenue but the board had no control over it — "we can worry about it as much as we like but it is not going to change materially day by day".

The updated projections for the Southern area show the 30- to 34-year-old age group had the largest number increase on the previous year, with an extra 770 people. That group was the second-largest group in the board’s area at 24,090.

The age group with the largest number of people was the 20- to 24-year-olds, although it had only increased by 30 from the previous projection, now standing at 25,890.