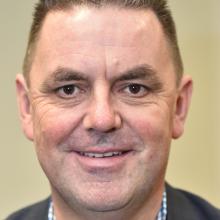 Chris Fleming.
The Southern District Health Board says it is "disappointed" so few boards agreed to join the food service deal with the Compass Group, putting at risk the anticipated savings.

Assisted by government entity NZ Health Partnerships, SDHB is still in talks with the multinational over the savings, a full year into the controversial 15-year deal. Just six DHBs signed up. The board hopes for at least $7 million over the contract term.

"When the DHB entered the contract we were aware that there would be implications based on the number of DHBs that ultimately joined the contract.

"We are naturally disappointed that more DHBs didn’t join the contract as clearly greater benefits would have been possible with volume.

"We are working with NZ Health Partnerships to finalise the cost implications with Compass and will share that information when it is available," interim chief executive Chris Fleming said.

The only other South Island board in the deal is Nelson Marlborough, which Mr Fleming ran before being seconded to SDHB. Labour Dunedin South MP Clare Curran called on the SDHB to release the revised savings as soon as they were available due to the level of public interest.

Ms Curran and the Real Meals Coalition released a statement after the meeting.

"The DHB has told us it will have a report ready within weeks on the revised costings and we have told them that public interest is high and the DHB must be transparent on this issue," coalition spokeswoman Anna Huffstutler said.

The group asked about the State Highway 1 rupture which meant Compass has had to use alternative routes for the meals.

"We were told that food could be frozen for six months before it expired. This did not reassure us.

"We remain concerned that the cost cutting plan by the Southern DHB to enter into a 15 year Compass contract will not deliver the promised savings and that the food quality has been compromised as a result," Ms Huffstutler said.

Hilarious, when are they going to realize people don't like to be pushed around and told what to do.

I just cant understand why other Health Boards don't want to join a food service deal with the Compass Group. The cooked food could be frozen for six months before it expired! Brilliant,what else would you want? A pig!

No wonder Chris Fleming was sent down here- to spread the party line that Compass would be best for us. His board in Nelson were persuaded, so who better to work on that message. We are being dictated to. This is our hospital paid by our taxes and we should be listened to. The hospital food we had was good. Compass food is not. It's no good blaming the other hospital boards for making the sensible decision to bypass Compass.

The board is disappointed! So are we. They put at risk the anticipated savings. They took that gamble when they agreed to a 17yr contract with Compass. Now that chairman has scooted back to Timaru leaving us to eat cake! Shame.

Only a Muppet would sign a 15 year contract not knowing what the costs and performance were at the outset. I can only conclude that the boards that signed up were run by Muppets.

They may be disappointed in the lack of money savings, but nowhere as disappointed as the patients who were served up the stuff passed off as meals.
The board didn't know what meals would cost, there were no KPI's in place to measure performance and quality of meals, there were no measures in place to penalise the contractor for poor performance.
Only after a long period did it become known that the meals on wheels food was frozen airline stuff. Anyone who has flown economy knows how poor that stuff is, little wonder they lost 70% of those customers.

SDHB are disappointed, I think all involved should be sacked.