By Mike Houlahan
0 Comments
The national bowel cancer screening programme has begun in the Southern District Health Board region.

The first letters inviting people to take part were sent out yesterday.

Five years in the planning, the screening programme will result in about 51,000 eligible 60-to-74-year-olds being invited to participate over the next two years.

The DHB marked the day with a launch in the Octagon which featured a giant inflatable bowel, which people could walk through and see what their innards look like - and, more relevantly, what they would look like if a potentially deadly cancer was brewing.

Screening programme clinical lead Jason Hill said the first test results were expected back mid-May, and by then a new gastroenterology unit should be up and running to handle the anticipated rise in demand for colonoscopy. 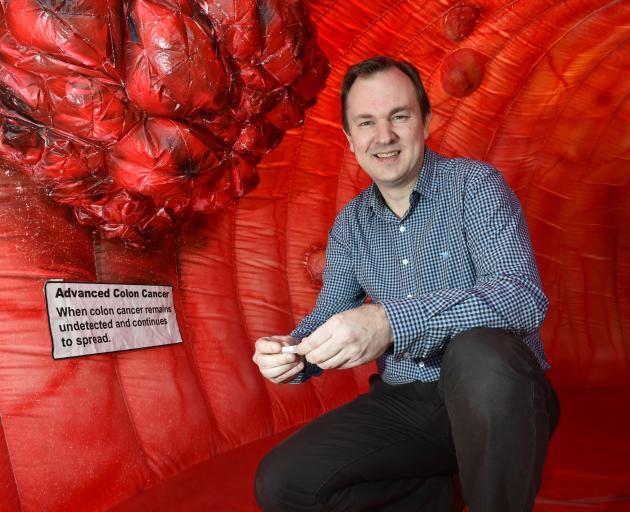 Southern District Health Board clinical leader of the national bowel screening programme, Dr Jason Hill, talks inside a super-sized inflatable bowel in the Octagon yesterday about awareness and the importance of getting screened. PHOTO: GREGOR RICHARDSON

``We are hoping for a very enthusiastic uptake. Wairarapa had a 66% response rate and I would love Southern to get over 70%,'' Dr Hill said.

``We are ready, and we have all the stuff and all the staff we need.''

Screening was the single most effective intervention available to intercept and treat a cancer which kills around 1200 New Zealanders annually.

``We will generate between 700 and 800 colonoscopies a year and we will identify cases of cancer which otherwise wouldn't be diagnosed.''