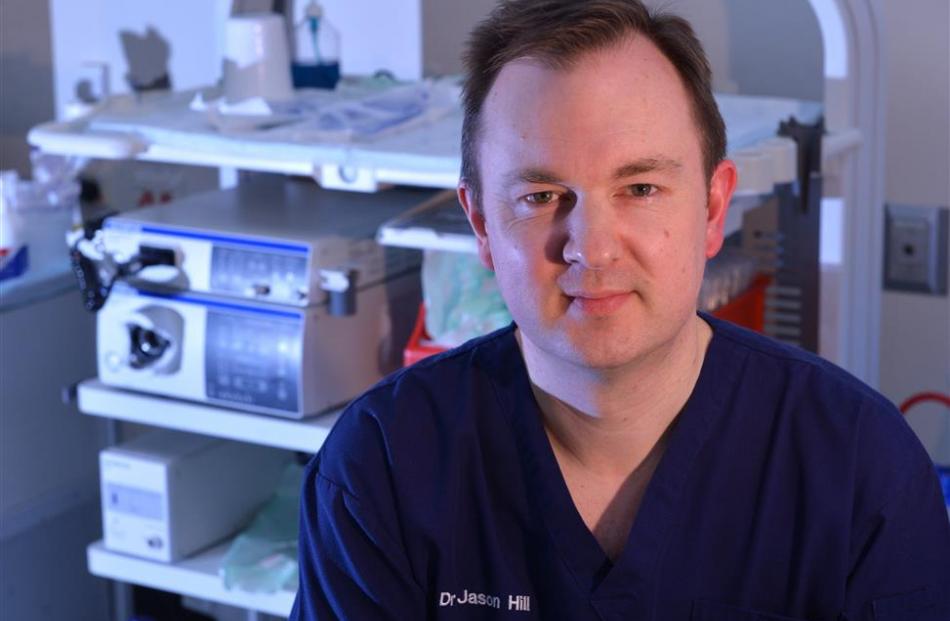 There is concern about the Government's bowel-screening programme, which critics say was rushed out as a Budget announcement. Questions about workforce readiness remain. Health reporter Eileen Goodwin spoke to SDHB clinical leader Jason Hill about his concerns.

An extra patient will be diagnosed with bowel cancer every week at Southern District Health Board once a screening programme is under way.

SDHB gastroenterology clinical leader Jason Hill says the figure could be as high as 80 diagnoses every year.

Early diagnosis is crucial to reduce deaths, and the South has one of the world's highest rates of bowel cancer.

The programme was expected to trigger 750 extra colonoscopies annually at SDHB.

"It gives me two years to sort things out. It gives me a year in my new endoscopy unit to get used to it.''

Dr Hill is working in a temporary facility while a new one is built. But much remains unclear.

A public spat between the Health Minister and Treasury revealed high-level division over whether the health system could cope. It is important because poorly planned screening programmes are risky.

Dr Hill said his department was functioning well and kept up with demand.

But it could not absorb the extra load without more resources.

'It's going to significantly increase demand on every service in the country.

"I'll be extremely honest with you ... I think Treasury's concerns are valid. I think the concerns of Health Workforce New Zealand are valid. Not enough people have been trained [as endoscopists].''

The Ministry of Health was working with boards, the statement said.

"The rollout will be a rigorous process to ensure DHBs have the capacity and capability to deliver screening effectively.

"A business case is being developed which will go to Cabinet [this month]; it will cover these issues,'' the statement said.

A Treasury paper from February released last month says "assumptions'' about the availability of endoscopists and pathologists were not considered credible.

Dr Hill said teaching or outpatient clinics might need to be scaled back if the programme was not resourced. He said it was unclear how the $39.3million allocated in the Budget would be spent.

"If we are not adequately resourced, something else will have to give.

"I've worked hard enough ... to make sure that the waiting lists are good in Southern.

"I can tell you that I will do everything in my power to make sure bowel screening comes to Southern and works effectively, because I've spent three and a-half years working to get there.''

Dr Hill said it was possible the private sector would be contracted in some parts of the country to provide colonoscopy, and he would prefer the public sector delivered the programme.

The age band of 60 to 74 has been criticised as too narrow, but Dr Hill believes it is the right place to start.

"Ultimately, we need to work towards a starting age of 50.''

In the past, the department was notorious for a lack of access to colonoscopy, but that has changed under Dr Hill.

Dunedin GP Jill McIlraith said the situation was much improved.

"Jason has made a difference in that he has made more transparent the criteria for who would benefit from a colonoscopy, and this has meant more patients have been able to access the service when needed.

"This does not mean that everyone who thinks they need one gets one, but it is a good starting platform from which to discuss with patients when colonoscopies are done and to discuss with them alternatives.

"If they don't meet the agreed criteria, but would like one to allay concerns, they can consider CT colonography privately,'' Dr McIraith said.

Dr Hill had been good at explaining to GPs why patients had been declined, and suggesting ways to manage the patient.

"Overall, the service is working much better than a few years ago,'' Dr McIlraith said.

SDHB has prepared a needs assessment detailing what it requires for bowel screening, but the communications department declined to release it for this story, saying the request would be considered under the Official Information Act.