Dept too busy for eye checks 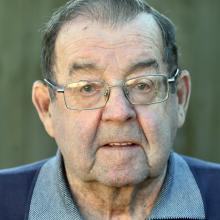 John Elsey, of Mosgiel. Photo: Peter McIntosh.
An 83-year-old may have to take out a loan for private treatment because Dunedin Hospital’s eye department is too busy to see him.

John Elsey’s referral from his general practitioner has been turned down because the department no longer accepts cases that are labelled routine.

He was told the department could not see him because of  "medical staff resourcing".

Mr Elsey has had a cataract previously and is at risk of glaucoma. He needs regular eye checks, partly to retain his driver’s licence, which is up for renewal in a few months.

His licence keeps him active and connected to friends through activities such as golf and fishing. He was not happy about the situation and felt frustrated.

A friend suggested he had to keep ‘‘ringing them up’’ and reminding the hospital.

"But I’m not that sort of a person.

"I’m just about at the stage where I think I’ll go and borrow some money or get some money from somewhere."

Dunedin South MP Clare Curran has been advocating for Mr Elsey. Southern District Health Board told her the department was not accepting routine cases like Mr Elsey.

"Currently the ophthalmology service is only able to accept referrals that are triaged as urgent or semi-urgent.

"We apologise for this inconvenience. However, we can only accept a limited numbers of patients for an assessment and we must ensure that these are the ones in our community that require assessment the most," board chief executive Chris Fleming wrote.

Ms Curran said it was "step forward" for the board to acknowledge it was not seeing routine cases in ophthalmology.

Patients like Mr Elsey faced a "sword of Damocles" because eye checks can be essential to preventing sight loss. The DHB is urgently seeing thousands of overdue eye patients after last year admitting 38 patients in Otago and Southland lost part of their sight due to delays.

Last month the department saw 140 patients in a single day, and the DHB later apologised because some older people were forced to sit on the floor.

In February, when the board last provided an update on the waiting list, more than 2300 Dunedin Hospital patients were overdue for an appointment.

The board has since declined to release overdue eye patient numbers, repeatedly saying it is formulating a new method of counting them after an external review recommended a change.eileen.goodwin@odt.co.nz

Hey, at least Bill English gets to balance the books going into an election...disgusting

Just shows how under resourced Health Services are. Seems Citizens are not as important as this fiscally myopic Government's other priorities with fat budgets.
Really Stupid because the impacts of sight impairment or sight loss will cost Government and taxpayers more in the long run. Many people of all ages will suffer badly and become dependant and disabled by neglect rather than the early intervention they should get .

More BAD management, short sighted and total neglect by Government. Health Minister CAN and should do better. Taxpaying Citizens and Health Services all round deserve better. SHAME SHAME SHAME

I just love the abject failure admitted by stating they will change the way they count patients rather than provide treatment.
I am more than amazed that the 38 blinded patients are not taking a class action against the SDHB for gross negligence. Something needs to awaken both government and the SDHB to get working.
The other thought of course is if SDHB wasn't paying all the fly in consultants doing precious little about the hospital rebuild, there might just be some money to treat patients.

Angry cannot describe how I fell about this news item. This National government has underfunded the health service. It is OUR tax money and it's not available for OUR health. Too much going on administration salaries, golden handshakes, PR and surveys, instead of treatment. Health professionals instead please. We have to change this government.