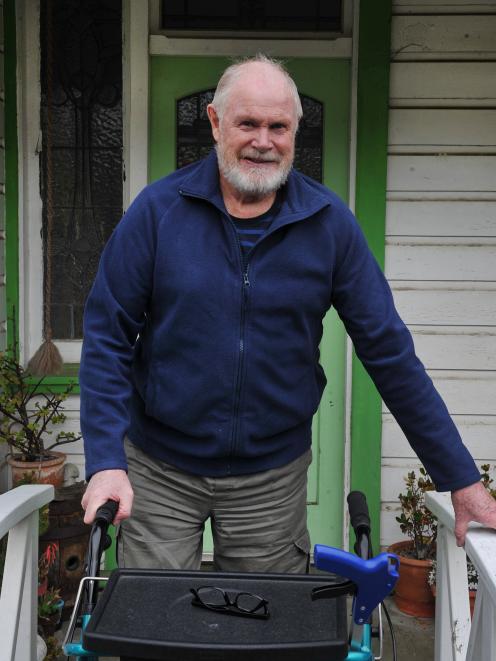 Stuart Reid, of Dunedin, has a date for hip replacement surgery after two years of waiting. Photo: Christine O'Connor.
The Southern District Health Board is trying to find an external provider for an extra 129 orthopaedic surgery cases in a bid to meet a national health target.

A request for proposal issued last week on a government website says SDHB would fund up to 129 extra orthopaedic procedures in 2016-17 in order to achieve a national health target.

"SDHB is seeking suitably qualified and experienced health providers, with the capability and capacity to deliver some, or all, of these procedures," the request for proposal says.

In March, the Otago Daily Times spoke to six people who needed hip surgery and published their photos and stories.

This week, the ODT contacted them for an update. Four had had surgery, one was waiting to see a specialist, and Stuart Reid (72) will have his surgery on November 16.

"Last week I was told ... I haven’t had the letter yet, but I’ve been given the date for pre-op assessment and all of that sort of thing," Mr Reid said.

Mr Reid said he did not understand why the waiting list was allowed to get so big.

He had been waiting about two years, and it was "very debilitating".

"I’m unable to sleep ... you can’t straighten out your legs for any length of time."

Heather Kelman, of Dunedin, is frustrated about waiting for a specialist appointment. The osteoarthritis sufferer saw an orthopaedic surgeon last year, who told her the DHB had limited resources. Ms Kelman (52) said it would be "lovely" if the extra surgeries being procured brought her own case forward.

"I’ve learnt not to get my hopes up. It’s just frustrating, I can’t even get into the specialist to even get on a list and get anything done. It’s getting worse and more painful."

SDHB planning and funding executive director Sandra Boardman, responding in a statement, said the DHB was using an open competitive procurement process to give all suppliers an opportunity to compete.

The ODT sought additional clarification of why the board was procuring so many operations at this time, but no-one was available for further comment. Mercy Hospital chief executive Richard Whitney said Mercy was interested in making a bid.

"We are currently assessing our capacity to respond to the tender."

Orthopaedic surgery waiting times have been a source of tension between DHB management and orthopaedic surgeons. Surgeons have lobbied for more operations, and have suggested southern orthopaedic patients need to be more debilitated than in other parts of the country before qualifying for surgery.