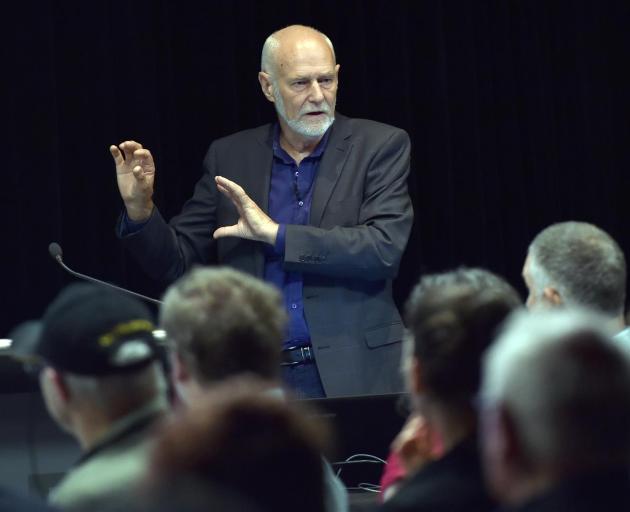 About 80 people were at Dunedin Public Art Gallery for the first open meeting so far to discuss the rebuild of Dunedin's hospital.

Southern Partnership Group chairman Pete Hodgson said on current timetables, demolition of the former Cadbury factory - where the inpatients building will stand - would start in 2020.

The new outpatients building, on the adjacent Wilsons block, would be partly open in 2023 and fully open in 2024.

Mr Hodgson was confident the 350-strong workforce to build the outpatients facility could be found in Dunedin, as it was about the same size as that working on projects at the University of Otago now.

However, the inpatients building would need 850 to 950 workers and Mr Hodgson predicted many would have to come from overseas.

''Finding those people is the biggest problem we face,'' Mr Hodgson said.

''If you want to know what is the most troubling thing about this build, because there are endless other things that can go wrong, that's at the top.''

Extensive work had been done to ensure local workers were trained, he said.

In addition, assuming - as was likely - that an overseas firm won the main construction contract, that firm would need to provide early training for local workers and ensure there were enough trained staff for maintenance work.

Mr Hodgson was confident local workers would still have jobs after the hospital build ended, as construction elsewhere in the city - notably at the University of Otago - would resume.

Other issues raised last night included whether the cash-strapped Southern District Health Board could afford the project, how environmentally-friendly the building would be, where mental health amd maternity services would fit within the development, and how Dunedin's transport system would cope.

Mr Hodgson said it was likely the new hospital would have underground parking - with possibly as many as 350 spaces - and other parking options would be looked at.

On the Cadbury site it was likely the dairy building would be preserved, Mr Hodgson said.

While options for the Cumberland St facades were being considered, he expected they would not be able to be saved.

Last night's meeting was filmed and footage will be posted on the hospital project's website.

SDHB commissioner Kathy Grant said there would be more public meetings on the hospital project, and meetings would also be held throughout Otago and Southland.

''This rebuild is an opportunity to reshape how we deliver health services in the lower South Island.''

Up your pay rates , an no problem . As we have been told for the last 30 years free market supply and demand . Or is only valid when it comes to top pay rates?