By Mike Houlahan
0 Comments
There are twin armchairs in the Keene family lounge, his and hers.

Tom Keene sits in his — Joan Keene’s chair is empty.

"I’d be sitting watching television and Joan would sit there and talk away to me and then ask if I was listening, and I would say ‘No’," Mr Keene says.

That cosy, familiar life began to change a decade ago, after Mrs Keene fell and suffered a brain injury.

While her long-term memory was — and still is — reasonably sharp, Mrs Keene’s short-term memory became worse and worse, to the extent that once simple household tasks became exhausting burdens.

Joan did not sit in the armchair any more.

Now she lay on the couch sleeping, often for six hours or more at a stretch, exhausted by the effort needed to simply live life as usual.

"You could get a vibe from her that she was getting frustrated, and it would sometimes drag you down too," Mr Keene said.

"She fought it as much as she could, she kept herself busy looking at puzzles and things like that, but her ability to concentrate on those has diminished . . . but you can’t do anything about it, so you have to get on with life." 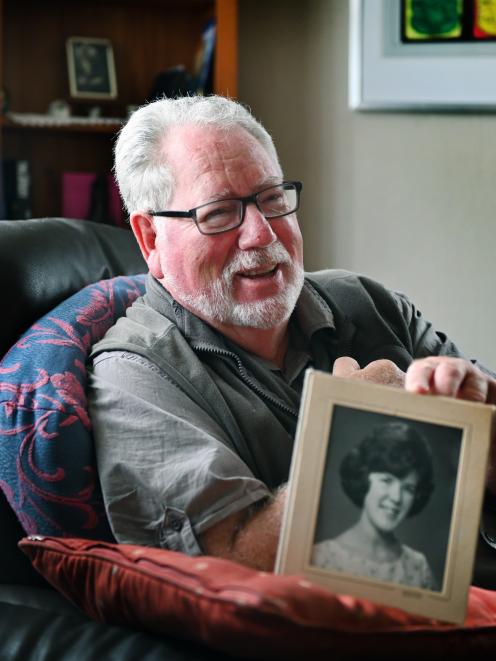 Tainui man Tom Keene, whose wife, Joan, is in care due to dementia. Mr Keene holds a picture of Joan photographed on her 21st birthday. Photo: Christine O'Connor
Mr and Mrs Keene met in 1965 at one of bandleader Harry Strang’s fondly remembered St Kilda dances.

She lived around the corner, they walked home together, and eventually they were married.

"She’s outgoing, very pragmatic, she knows her own mind and argues her corner."

The Keenes have a grandson and three daughters.

Mrs Keene (70) worked for Presbyterian Support, nursed her own mother, and one of the girls has become a caregiver.

In the end, as Mrs Keene’s memory deteriorated, Mr Keene — a retired meat inspector — found himself beginning a new career as a caregiver.

"She had several falls, which didn’t do her any good at all, and slowly her mobility went down and her ability and confidence to do things went down too," Mr Keene said.

"I had a bit of a learning curve . . . we had to change the way we did things and we had people come in to give her showers and do the house for three days a week, which was a big help but on the other four days it was me."

Eighteen months ago, Mrs Keene started taking time out in respite care to give both her and her husband a break.

The unspoken question was whether Mrs Keene needed full-time care.

The difficult decision was made, and Mrs Keene moved permanently to Highview Home and Hospital, in High St, Dunedin.

Mr Keene sees his wife regularly, six days a week at least, and tries to arrange one outing a week for the two of them.

He knows he should not, but he cannot help feeling a little bit guilty.

However, he and Mrs Keene met enough people through the Forget Me Not group and through Alzheimer’s Otago to know that the partner of someone with dementia can be wrecked themselves by the strain of caring for their loved one.

"We haven’t just abandoned each other, but it is pretty tough . . . it’s quite surreal at times," Mr Keene said.

"It’s a bit like a death in the family but different — you are still alone.

"You cut the lawns, do the garden, go fishing with my brothers, play a game of bowls, but when you come home at night there isn’t anyone else other than the cat in the house."

• The Otago Daily Times is writing a series of articles concerning aged care. If you have a story to share, please contact mike.houlahan@odt.co.nz