Listening to the nation 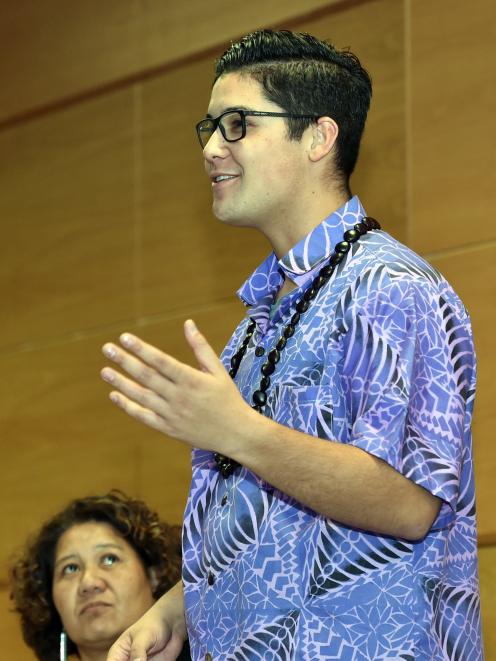 Josiah Tualamali'i, a member of the Government panel carrying out an inquiry into mental health and addiction, speaking at its Dunedin public meeting. PHOTO: PETER MCINTOSH
Josiah Tualamali’i speaks for many communities on the Government Inquiry into Mental Health and Addiction — youth, Pacific Island, and Otago. He talks to health reporter Mike Houlahan about the panel’s work  and his hopes for the future.

Josiah Tualamali'i was planning to go to university this year.

Instead, he has embarked on an education of a different sort - joining the Government panel carrying out an inquiry in to mental health and addiction.

It is a weighty responsibility for the 23-year-old, who was appointed to the panel to bring a youth and Pacific Island perspective to the ongoing inquiry.

Mr Tualamali'i is also keen to stress that while he lives in Christchurch now, his Dunedin upbringing means he brings an understanding of the lower south to the panel's work.

``I went to Anderson's Bay School before we moved to Christchurch as a family,'' he said.

``I grew up in my grandparents' house in Concord and I have family up in Central - I still very much consider Dunedin my home town.''

Mr Tualamali'i returned home recently with the panel as part of its regional visits programme - a whistlestop sprint around New Zealand gauging public opinion on mental health and addiction issues.

It is no joy ride - the panel works long hours, and meets people every day who are either confronting their demons, or have tales to tell about the most despairing moments of their lives.

The panel, chaired by former health and disability commissioner Ron Paterson, has attended more than 300 meetings with individuals, community groups and organisations.

When its regional programme ends, it has more than 5000 written submissions to assess, before sitting down to write its final report - due to be delivered to Health Minister David Clark on October 31.

``In my own life I've been through some difficulties and challenges and I wasn't sure who to talk to,'' Mr Tualamali'i said.

``When we formed Pylat it was partly from a recognition that there were other Pacific young people going through similar things such as myself, and they wouldn't be aware of all the cultural support and help that was out there.

``There are people who they can turn to, and that was where I got interested in this field - making sure other people had the opportunity to find them.''

Being approached to be on the panel was an enormous surprise and a huge honour, Mr Tualamali'i said.

Final confirmation he had been appointed came just days before the panel make-up was announced - and with its short timeframe to consult and report back, that has made 2018 a whirlwind so far for Mr Tualamali'i.

Not that he's complaining.

``When I heard the announcement about the inquiry I thought `What a great idea'. I was really excited that it was going to happen. `I wonder who will be on it?''' he said, little knowing the role he would be asked to play.

``Being a part of this has definitely had its challenges, but what has really helped and made this all worthwhile are those personal stories we are hearing - people opening up to us, to the Government, or to others, and are doing it because they trust us. And that's something you can't buy.

``That has meant I feel every day that getting up to do this is a privilege - we are hearing their life stories, and they are expecting us to take those and come up with recommendations which will hopefully be transformational for our country.''

While Mr Tualamali'i is ostensibly the youth voice on the panel, he is no narrow specialist. During the regional tour he has talked to farmers, pensioners, prisoners and rainbow groups, as well as young people.

``Wherever we have been, I am the same as every other panel member,'' Mr Tualamali'i said.

``This is an opportunity for all of New Zealand, so it is important to have a young person there to share their learning and support the connection between people and the panel.''

There is little time left before the panel has to report to the Government - a tight timeframe which has lead some to question whether the inquiry has long enough to do its job.

Mr Tualamali'i believed the pace the panel has to work at was a strength, not a weakness, of the process.

``There are a lot of people who have waited for an outcome for too long,'' he said.

``In this short time we have, we feel we can pull together a report which highlights the people's voice - coupled with advice from scientists and international research - and then produce something our country can reflect on, and make changes to meet people's needs.''