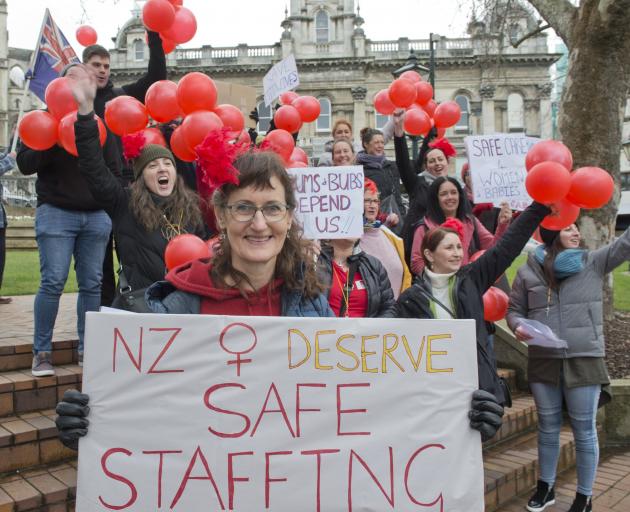 Dunedin midwife Jo Baillie fights for safer staffing levels on maternity wards during the Midwifery Employee Representation and Advisory Service (Meras) strike action in Dunedin yesterday. PHOTO: GERARD O’BRIEN
It was one of those days which made Jo Baillie question whether she was really in the right profession.

The Dunedin midwife — one of those who walked off the job yesterday in protest against pay and working conditions — arrived at work last week to find she was short-staffed by two midwives and she had to share the workload with one other person.

"I had eight hours of work.

"I had seven woman and six babies that I had to look after during that time, and some of them were very high needs.

"I had to neglect support for people who were stuck in bed who were unable to care for themselves or their baby, all because I was prioritising life-saving measures.

"One woman, I only managed to see her for just 10 minutes during that day.

"It’s just extremely high stress levels, all day — not even time to go to the toilet or have a glass of water."

Mrs Baillie was sent some relief for two hours but the male nurse had no training in obstetrics or midwifery.

"This is putting patients at risk and they’re definitely experiencing neglect.

"This kind of day is becoming more and more frequent."

Mrs Baillie has been in the profession for 30 years and said it was in the worst state she had ever seen it.

Mrs Baillie was one of about 20 Dunedin Midwifery Employee Representation and Advisory Service (Meras) union members who walked off the job for eight hours yesterday, to call for better pay and work conditions during protest action in Dunedin’s Octagon.

Meras representative Michelle Archer said midwifery was a specialised service and there was a national shortage of midwives.

"There’s a staffing crisis, so we really need midwives to be paid more so that we can reclaim those who are leaving the profession in droves.

"We’re hoping this [action] will bring the negotiators back to the mediation table with a better offer, because we want to retain midwives and attract people to midwifery."

Meras members around the country will strike over the next two days, culminating in a rally at Parliament on Thursday.

The union, which represents about 1500 district health board-employed midwives, has also issued a strike notice for a further 12-hour strike (8am-8pm) on August 19.