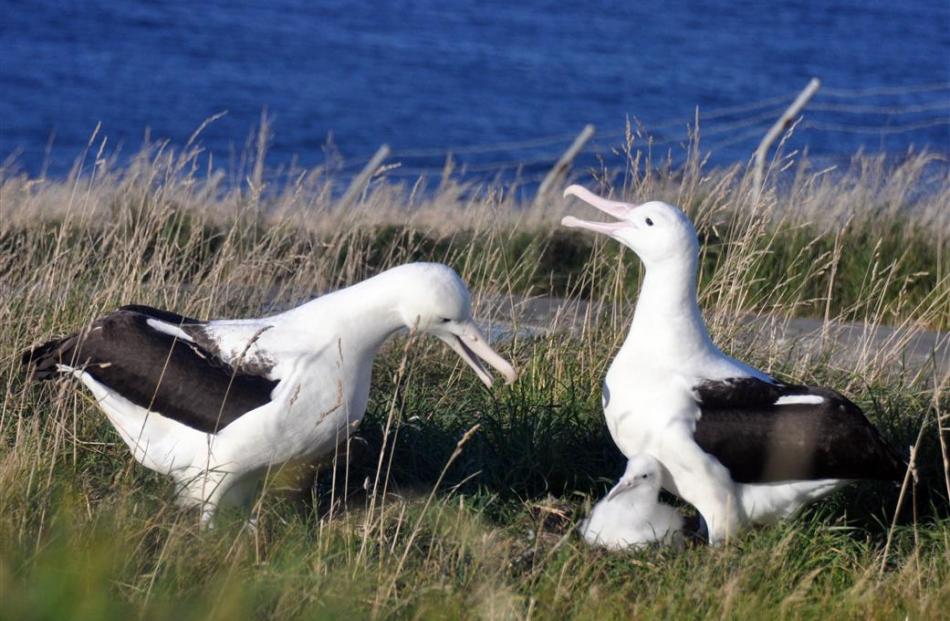 Northern royal albatrosses at Taiaroa Head, like those in this photo, got through Monday’s heat unscathed with some help from a sea breeze and a sprinkler system. The first eggs are due to hatch on January 12. Photo by Royal Albatross Centre.

All of Dunedin's albatrosses and their incubating eggs survived Monday's heatwave thanks to the breeze and an ingenious sprinkler system.

Taiaroa Head's 29 nesting pairs and their eggs got through the 34.6degC heat unscathed and are due to hatch on January 12.

Department of Conservation head ranger Lyndon Perriman said the wind was a blessing as, on a 20degC day without wind in November, the ground temperature got up to 38degC.

This, combined with the heat of adult birds, created real problems.

"The heat [on Monday] certainly didn't help. The birds were hot but there was no major concerns. If there's no wind and the sun is beating down, then that's when the problem comes,'' he said.

A sprinkler system had been devised about five years ago to counter the ground temperature, which was turned on manually when needed.

On Monday, the sprinklers were on, but just for one nest tucked away on the southern side of the headland out of the wind.

"We had an irrigation sprinkler going for a couple of hours,'' Mr Perriman said.

"In the past we've had birds die from heat exhaustion. If there was no wind, it would have been absolutely diabolical out there.''

The colony started with 35 eggs, of which 32 were fertile.

Two eggs were lost due to accidental breaking by the nesting parents and the other was an embryonic death related to temperature or infection.

The in-decline yellow-eyed penguin population was also thought to have survived the heat.

Yellow-eyed Penguin Trust field manager David McFarlane said although the birds had not been physically checked on Monday, chicks had passed the brooding stage so had probably been unaffected.

"They are a subantarctic penguin [so] we understand that days like [Monday] can be very stressful for chicks,'' Mr McFarlane said.

"We are hoping that it has not had a bad effect, but days like this are not that good for the yellow-eyed penguin.''

An online funding page has been set up by the Otago Peninsula Trust to ensure albatrosses survive the El Nino weather pattern.