By Wyatt Ryder
2 Comments
Pupils of a Dunedin school could only watch as a military helicopter landed on their sports field and soldiers took position yesterday.

That is because touching most of the equipment was strictly prohibited at the demonstration. 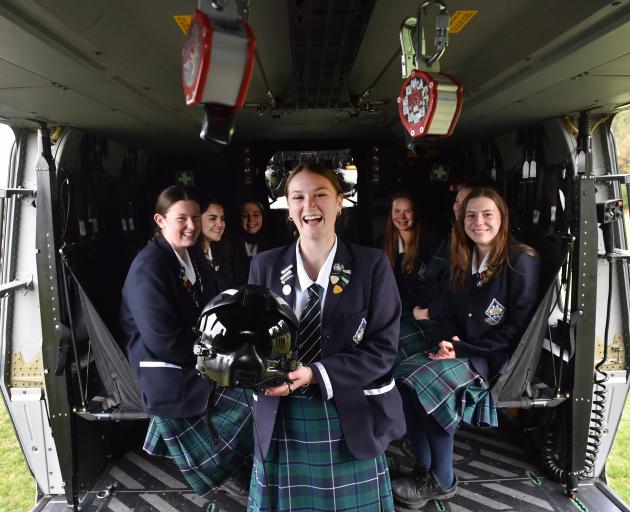 The helicopter touched down during interval time, and some pupils held hot snacks in one hand while using the other hand to film with their phones. 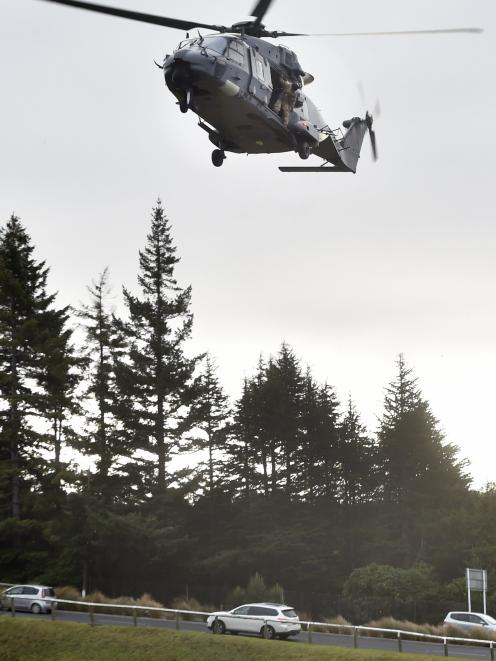 The NH90 helicopter comes in to land at the Otago Boys’ High School sports fields yesterday.
Once on the ground, four soldiers from the Dunedin army reserves poured out of the aircraft and dropped prone with weapons at the ready.

After a brief safety warning, telling pupils not to touch the guns or anything expensive, they were able to sit in the helicopter and have a look.

Many young people had not considered a defence force career so touring the schools was a great way to bring them a taste of it. While the display was authentic, no live ammunition was on site, he said.

They visited pupils in Central Otago on Tuesday and planned to stop at Invercargill and Gore schools on Wednesday, but poor weather ruled out flying.

Yesterday, they dropped in at John McGlashan College, then Otago Boys’ High School before heading to Taieri College. The display was received well and had many pupils interested.

Otago Girls’ High School pupil Grace Twaddle said seeing the equipment was really exciting and she was planning to pursue a career in the Royal New Zealand Navy. She was surprised by how high-tech the modern defence force equipment was.

Just after 19 children were gunned down and killed in a Texas elementary school. Not the best look for helicopters/soldiers and guns arriving in a Dunedin school & public reserve.

Awesome job. Nash, what has our military dropping in and educating our kids about possible jobs got to do with a demented out of control shooter ? I guarantee those with military training in NZ are very unlikely to consider that as an option.

Grace, go for it, we need more women in a maritime role. I started with the RNZNVR and moved to merchant navy, I still love my job. There is still less than 2 % of the merchant navy who are women and more wouldn't go astray :)