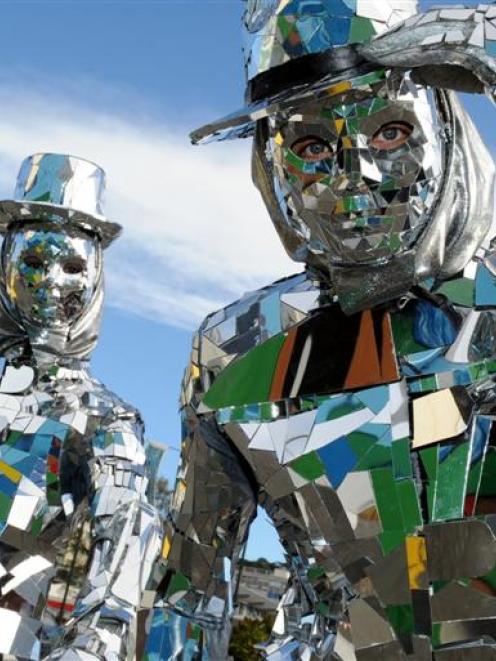 Jeff Robinson (left) and Daniel Gordon take in their surroundings in Dunedin this week. Photo by Stephen Jaquiery.
There will be some serious reflection going on in Dunedin today when two "Mirrormen" characters make their debut appearance at the Otago Farmers Market.

"I don't think anything like this has ever been seen before. They have a visual element that's really otherworldly and fantasy-like."

Highly Flammable was established in Dunedin in 2003 to promote and enhance public events and festivals.

"We like doing things that are different and which people of all ages can enjoy. We want to add a 'wow' factor to events."

"I was looking at different mediums to use and thought it would be fun to make something out of mirrors. We try to do two different new costume designs every year. We research and design for three months and then work on the designs with an artist for three months."

The costumes each took about 200 hours to complete.

The Mirrormen will make their international debut at the Fiji Showcase festival in Suva next month, before appearing at the Teatro Del Fuoco (Theatre of Fire) international fire-dancing festival on Stromboli Island, off the north coast of Sicily, and the Boomtown Fair in England.

"They absolutely love what we do over there [Europe]," Mr Hendra said.

"We're looking at making some stilt-walking butterflies out of wood next."