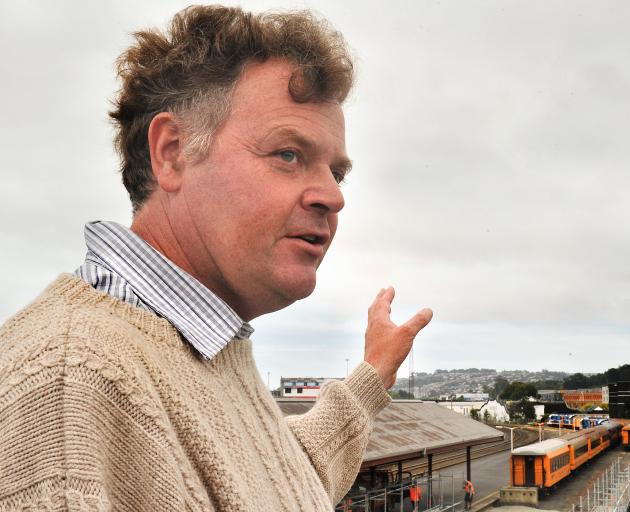 Reflecting on rail carriages to be either kept or sold by Dunedin Railways is train enthusiast Andrew Robinson, standing on the pedestrian overbridge by Dunedin Railway Station. He believes heritage carriages have a strong tourism upside. PHOTO: CHRISTINE O’CONNOR
Selling off heritage assets could limit the potential of Dunedin rail when tourism rebounds, a restoration enthusiast fears.

Before Covid-19, heritage was the fastest-growing sector of the buoyant tourism industry, Andrew Robinson said.

The planned sale of items such as six wooden carriages built between 1912 and 1923 — because they are considered museum pieces or no longer suitable for a commercial venture — was a brave call by Dunedin Railways, he said.

Mr Robinson is Otago Heritage Bus Society operations manager and he restored carriages and wagons for Dunedin’s Ocean Beach Railway for about 25 years, as well as having a stint with the Taieri Gorge Railway for about three years.

"Standing on the open platform, being able to open the windows in the old carriages and stopping in remote places — that’s where the magic is," he said.

Dunedin Railways chairman Keith Cooper has said assets for sale are not useful to the company in any future model.

Company directors were not satisfied the carriages could be operated safely in a commercial venture, Mr Cooper said.

The board of the Dunedin City Council-owned company had received reports that led to this assessment.

Mr Robinson had not seen those reports, but he believed the safety profile of carriages for sale was not greatly different from some carriages that were to be retained.

Some were only slightly more modern.

Mr Robinson had travelled in modern carriages with air conditioning and sound-proofing and said this insulated people from their experience.

They might as well watch a DVD, he said.

Mr Robinson said Dunedin Railways was conflicted between promoting lovingly restored carriages and being anxious to get rid of them.

There had historically been substantial community buy-in for running Otago rail trips, he said.

Dunedin Railways was put into hibernation in 2020, when passenger numbers were set to fall dramatically because of fallout from Covid-19.

The operation had become reliant on custom from cruise ships, but that market collapsed.

Limited services aimed at the domestic market had been run since.

Former locomotive assistant driver Paul Jeffery said heritage carriages were one of the biggest marketing points for the railway.

People could stand on open balconies, take in the view and feel at one with the Taieri Gorge, he said.

The wooden carriages were lighter and kinder to the tracks than later models, Mr Jeffery said.

The carriages were operational as recently as March 2020.

Mr Cooper said their safety could be improved, at a cost.

Company directors were obliged to run a safe operation.

As heritage vehicles, they are exempt, a heritage rail technical committee has said.

When the carriages operate on the national rail system, they are subject to speed and operational restrictions.

Organisations and individuals have been invited to express interest in acquiring surplus rolling stock from Dunedin Railways.

Expressions of interest close on February 4.