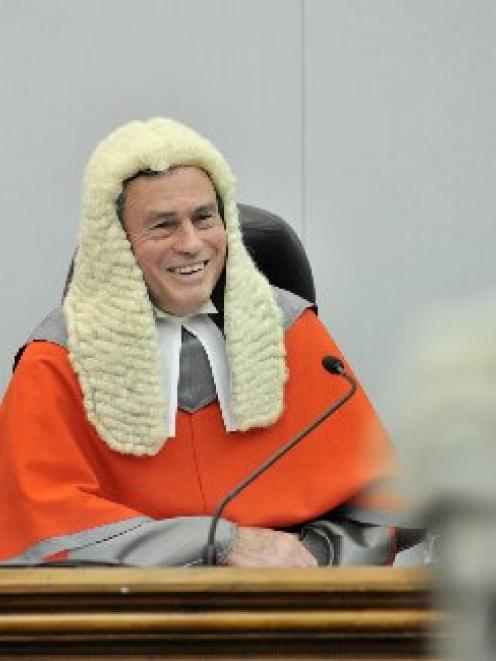 Justice Lester Chisholm at his final sitting of the High Court at Dunedin on Friday. Photo by Linda Robertson.
The kind words spoken at a special High Court sitting at Dunedin for a retiring judge went without argument on Friday.

About 50 people, including family, judges, lawyers and court staff, gathered in the Dunedin District Court to say goodbye to Justice Lester Chisholm at his final sitting of the High Court at Dunedin.

The Christchurch-based High Court judge said he was ''humbled and honoured'' by the ''support received in the South''.

He recalled the nervousness of his first sitting in the High Court in 1996 and how his ''knees were shaking'' and how he ''bowed so deeply'' his wig fell off.

Justice Chisholm acknowledged the ''skill, dignity and courage'' of the first speaker at the sitting ''the leading silk in the country'', Judith Ablett-Kerr QC.

''A busy life in law masks the passage of time.''

His appointment came the year after television cameras were introduced to the High Court.

Justice Chisholm was a ''natural for television'' and never ''flustered'' by it and never tempted to ''play up'' to it, Ms Ablett-Kerr said.

He was empathetic but never shied away from making hard decisions, she said.

Justice Chisholm said he started supporting Otago rugby when it ''pinched'' all the players from Hawkes Bay, where he and his family had lived.

Otago was a magnet for Hawkes Bay people and his four children had studied at the University of Otago, he said.

''The further south you go, the warmth and the hospitality grows.''