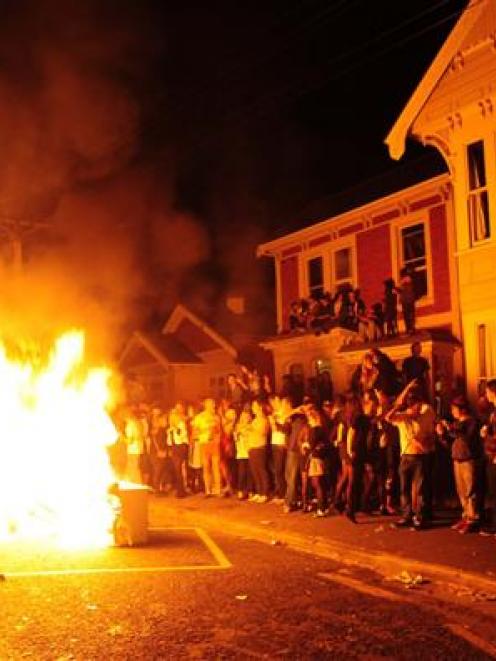 More charges could follow as police review video and photographs of the Castle St disorder. Photo by Craig Baxter
Three high school pupils are among those charged over the weekend's Castle St disorder, it has been revealed.

And police have warned more offenders may find themselves in court as they review video and photographs of the Undie 500 mayhem.

A total of 61 people have, or will, appear in court after charges against two people were withdrawn through lack of sufficient evidence.

Among those charged were two high school students from Dunedin and one from Napier.

Students made up more than half of those charged, with 27 from Otago University, eight from Canterbury University, three from Lincoln University and one from Victoria University.

Six are unemployed, two are builders as well as the three high school students.

In addition there was one each giving their occupation as trade assistant, shearer, mill hand, landscape gardener, forestry worker and retailer.

A total of 23 charges of disorderly behaviour likely to cause violence have been laid as well as 19 charges of breaching the liquor ban, 13 of obstructing a police officer in the execution of their duty, three of offensive language, three of wilfully breaking glass and one of offensive behaviour.

Inspector Campbell said next week another team of officers will review police video footage and still photographs as well as obtain other evidence that may help identify further offenders from the weekend's disorder.

"The officers will be directed to concentrate on those throwing missiles and lighting fires", Inspector Campbell said.

"Police gave clear warnings prior to the event that there will be consequences for law-breakers so the continued enquiries will come as no surprise", he said.  - ODT Online