Heather Fleming's trip to the supermarket yesterday took planning, but not just a list - several reconnaissance missions and a briefing for her helpers.

The Waitati woman won a grocery grab at Gardens New World and was assisted in the 90-second dash down the aisles by Highlanders players Andrew Hore, Ben Smith and Chris King.

"That was great fun," she said at the end, two trolleys full of products in tow.

After briefing the players about her focus on the meat section as "meat was a huge item for me and everything else was a bonus", Ms Fleming made it to aisle five, targeting specific products identified on a "few recces". 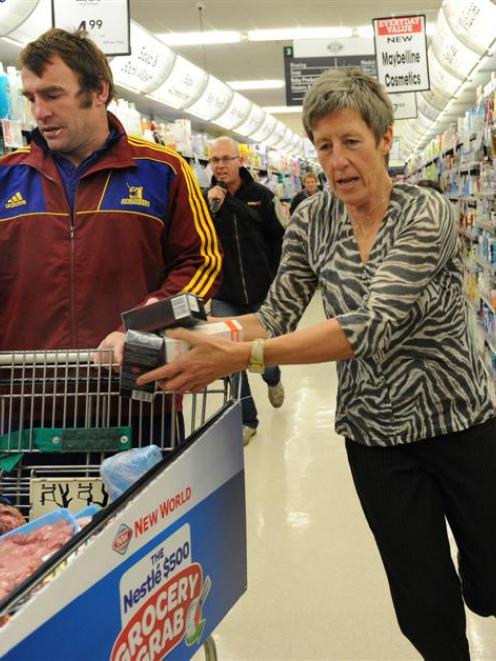 Highlanders hooker Andrew Hore helps select some items for Heather Fleming, of Waitati, as she does a $500 grocery grab at Gardens New World, in Dunedin, yesterday. Photo by Craig Baxter.
"What's been really fabulous was the plotting and planning that went ahead of the actual day."

She described her helpers as "marvellous", and praised their "good hands".

Hore said he spent the 90 seconds "just trying to keep up" and it "threw me a little, when we were halfway down one aisle and had to turn around for the meat again".

The grocery grab was won as part of a Nestle and FlyBuys promotion.

The Highlanders spent an hour in the store yesterday signing autographs, being photographed with fans and packing bags for customers.

Store manager Gary Roberts said it was good for customers and the store to host them, and good for the team to get among the community.

"We might have to teach them a thing or two about packing bags, though."