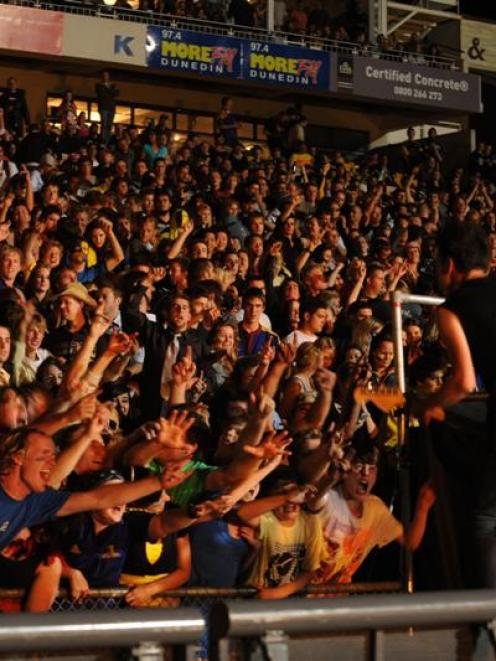 New Zealand band Shihad entertains a packed terrace at Carisbrook on Saturday night. Photo by Stephen Jaquiery.
It is smiles all round in Highlanders country.

Though the exact crowd number would not be known until today, estimates put it at between 12,000 and 13,000.

With average crowds of only 7000 last year, a crowd nearly double that had Highlanders chief executive Richard Reid smiling.

Mr Reid questioned last week whether Dunedin had enough support to keep the Highlanders but he got the answer he and die-hard rugby fans wanted on Saturday night.

There were long queues outside the ground as the match started and some tickets were still being sold nearly half an hour into the game.

The terrace was packed, mostly with students, who enjoyed the game and Shihad.

Police made no arrests.

Mr Reid was thrilled with the turnout and with the win, saying the crowd had faith in the Highlanders and the team had repaid them with a gutsy win.

The good weather helped, as did the attraction of the band, and a southern derby.

The win showed how competitive the side was, which was vital to keep supporters coming along.

Mr Reid hoped for a big crowd at Invercargill on Saturday night when the side takes on another New Zealand side, the Chiefs.

There are two more games at Carisbrook this season, against South African sides the Stormers and Cheetahs, while a home game will be played at Palmerston North against the Bulls on March 28.