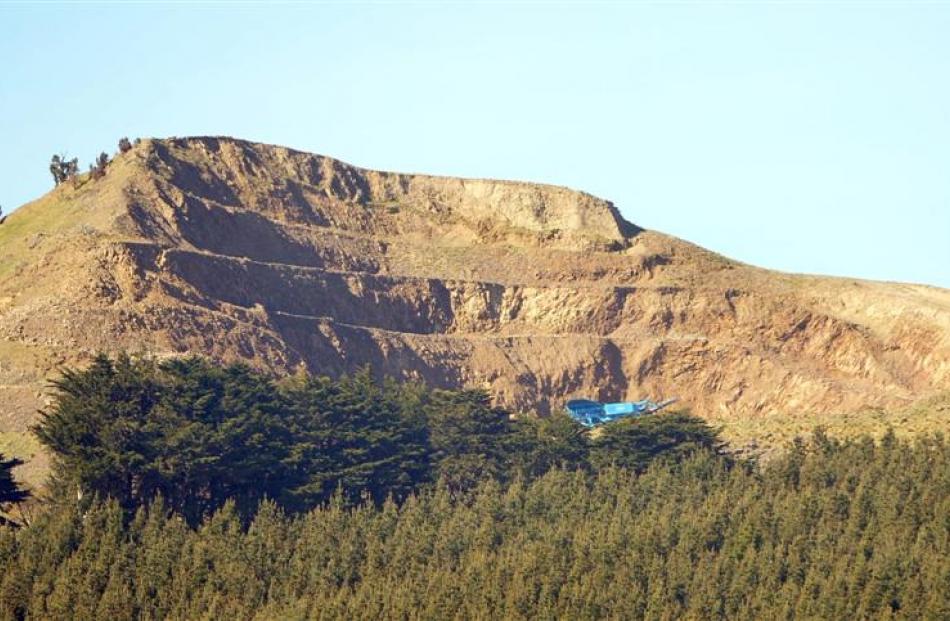 The Jaffray Hill quarry on the lower slopes of Saddle Hill, near Mosgiel. Photo by Stephen Jaquiery.

The man instrumental in the Dunedin City Council's move to take the Saddle Hill quarry matter to court plans to stay active on the topic and is keen to help find a solution that is acceptable to the quarry's owners, the council and the community.

Former city councillor and long time Saddle Hill resident Colin Weatherall says there is, for him, no question the fight to retain the profile of Saddle Hill - or at least something akin to what it historically was - would continue.

It had concerned the community the whole 30 years he was an elected representative of Saddle Hill residents and he planned to continue to be ''relatively active'' on the topic.

He had not yet been invited to a public meeting planned for December 13 to discuss where to from here for the community, but said he was more than willing to be involved in discussions with the parties, if they would have him.

He said a recent High Court finding that a consent for the quarrying did exist was appreciated because it at least finally established a legal position, and he respected the landowner's rights as a result of that decision.

''Unfortunately, we didn't quite get all the answers we were after.''

It was the scope of the consent that now became the key issue, and the parties had to get together to work that out.

It became apparent this week that quarry owner Saddle Views Estate Ltd was promoting the reclamation of the quarry as a solution.

It was an idea that had been considered before, but for it to be feasible the landowner would have to also have a role in the reclamation, he said.

His perspective was he owned the land, had a legal right to quarry it and was choosing to do that out of an obligation to his staff's long-term security and keeping the cost of the city's infrastructure requirements down.

He was willing to work with the council as recommended by the court, and what happened next depended on the outcome of discussions with council staff.