Hip bone connected to the iPhone 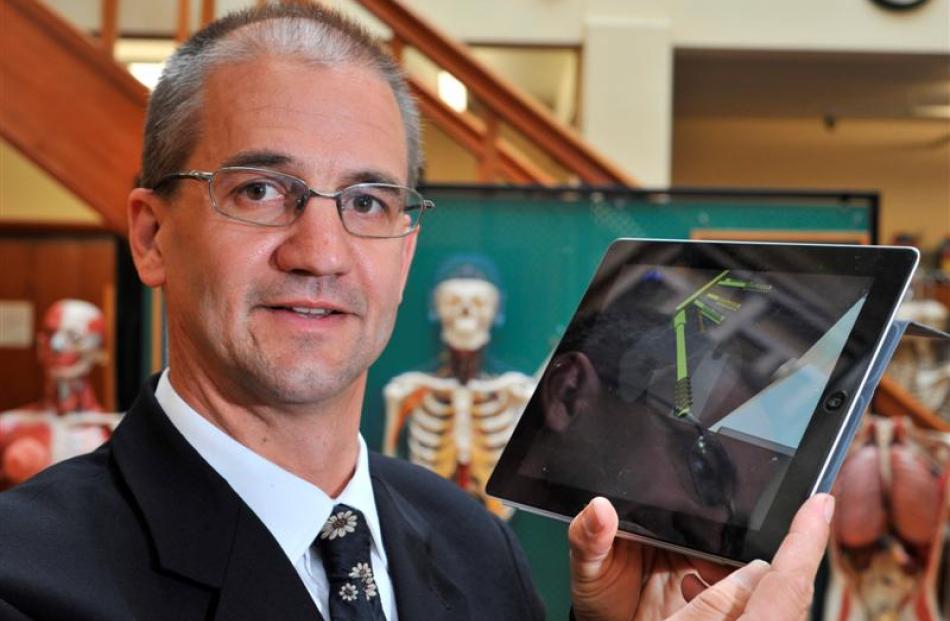 Dr Phil Blyth with his surgery app at the University of Otago School of Medicine Anatomy Museum yesterday. Photo by Gregor Richardson.

An app developed by a University of Otago lecturer allows budding surgeons to practise procedures on their iPhones rather than their patients.

The ''Bonedoc'' app - available for iPhones and iPads - is the brainchild of Dr Phil Blyth, a senior lecturer in eLearning in medicine and a practising emergency medicine doctor.

The app allowed everyone from trainee surgeons to gamers to step into a virtual operating theatre and carry out a hip fracture repair procedure - with users given a score and ''virtual dollars'' based on how the surgery went.

Dr Blyth said the inspiration for developing the app came while he was working as an orthopaedic registrar and leading a surgical procedure for the first time.

''[I realised] that here I am in a lead gown in the middle of the night trying to work out the best way to proceed and thinking 'why am I learning on this patient?'

He envisaged surgeons using the app - which replicated all the steps in the procedure - in the minutes leading up to surgery.

For gamers it was like an app version of the board game Operation - with one key difference.

''The things that you are learning here are real skills, so maybe the teenager of today [could say] I want to be a surgeon in the future.''

Using apps as a way to learn surgical skills would become more important as surgery got less invasive, which made procedures difficult to replicate outside the operating theatre.

Dr Blyth has more apps in the works, including a juvenile hip procedure and a knee operation.

''Phil is unique. Not only is he a fantastic medical professional but he has taught himself to code effectively.''

The app was hooked up to the Apple Game Centre so users could compete for the highest score with friends or even other doctors.

The app is available from bonedoc.org or the Apple AppStore and an Android version is being readied for release next year.