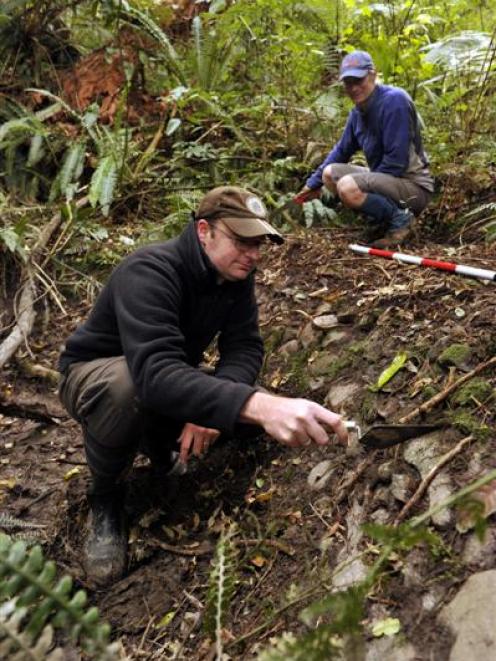 Historic Places Trust Otago-Southland regional archaeologist Matt Schmidt (front) and Mountain Biking Otago president Hamish Seaton examine the site of recently rediscovered breeding ponds for brown trout, dating from the 1860s, in bush behind Logan Park High School. Photo by Gerard O'Brien.
It may just be two muddy holes in the ground and a pile of rocks in the middle of the bush but a recently rediscovered feature behind Logan Park High School has Matt Schmidt very excited.

So excited, in fact, that the Historic Places Trust Otago-Southland regional archaeologist is putting aside time to tramp, trowel in hand, through mud and streams to uncover what he understands are the earliest successful breeding ponds for brown trout in New Zealand, dating back to 1868.

And while they may be only holes and stones at the moment, Dr Schmidt has plans for what were the Opoho Breeding Ponds, originally used to raise trout brought to Dunedin from Tasmania.

While there was an awareness among historians of the ponds, they most recently came to light earlier this year when Mountain Biking Otago began building a multipurpose track through the area for cycling, jogging and walking.

President Hamish Seaton said he had no idea what the feature was, but a local woman contacted the Historic Places Trust to report the matter.

He was "a little bit worried" when he got a letter from the Dunedin City Council telling him the group was pushing the track through a historic site, fearing the group had damaged it.

That concern abated when Dr Schmidt agreed to provide an archaeological assessment and to help turn the site into a heritage feature that would make the track a better facility.

Dr Schmidt has been involved in several heritage trails, including the Gibbston Trail near Queenstown.

"The beauty of these projects is that recreational users become part of the heritage experience, which promotes and helps advocate for heritage," he said.

Dr Schmidt's assessment said the first trout hatchery ponds at Opoho were built in 1868 to establish a viable freshwater game fishery in Otago, work followed in detail by the Otago Daily Times and Otago Witness newspapers.

They were almost all successfully hatched, and formed the original stock from which most of the streams in Otago were stocked.

Further up the gully, two iron riveted boxes, possibly part of a filter system, were identified roughly in the position they held on an 1880 map.

Dr Schmidt said the temperature and the clarity of water in the area was essential to raising the fish.

At the site yesterday, he showed the Otago Daily Times roofing slates he thought came from a roof over the pond.

Once the work to uncover the ponds, expected to be completed in about three weeks, was complete, information panels would be added to the site to make it an attraction for visitors.

Mr Seaton said it was "great" to have a historic attraction on the track the club was building.

"People will come up just for the history," he said.

Mr Seaton said the panels, and the track, were expected to be completed by the end of the year.