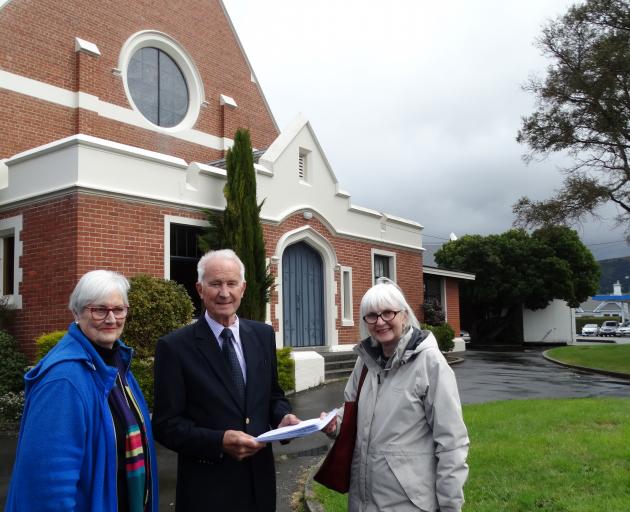 Mr Borick was supported at Wednesday's meeting by the leader of a public campaign to save the church, heritage developer Stephen Macknight.

The petition was presented to Highgate Church minister Rev Geoffrey Skilton after the meeting.

Speaking before the meeting, Mr Borick said his appeal of the decision of the Highgate Presbyterian Church parish to demolish the nearly 100-year-old church was based on "misleading, inaccurate and incomplete information provided to the congregation by the parish council''.

"Based on that information, the congregation made the decision to demolish the church,'' Mr Borick said.

Concerned that the parish's decision came after only an initial assessment of its earthquake risk, the Macknight brothers commissioned a detailed seismic assessment of the church building by Dunedin structural engineer Lou Robinson.

The engineer found the church building was 80% earthquake compliant, and that it would take very little to make it 100% compliant, Richard Macknight said.

The campaign to save the church has garnered growing community support.

The petition opposing demolition was led by Maori Hill residents Barbara Frame and Gillian Fleming, who found many supporters eager to sign.

"A lot of the people we talked to had long-standing connections with the church, and a lot of affection for the building,'' Ms Frame said.

Historic buildings such as the church had been built with a lot of community support and were appreciated as local treasures.

"So we are really hoping for a positive outcome,'' she said

In a statement, Dunedin City Council Heritage adviser Dr Andrea Farminer said the council had been following Mr Borick's progress with his appeal to the Southern Presbytery to halt the demolition of the church, from a public interest perspective.

"We are hopeful that the appeal commissioners will give Mr Borick's evidence due regard in their process, and remain of the opinion that the Highgate Church retains considerable future potential for its adaptive re-use, whether continuing as a valued place of worship or in some other capacity,'' Dr Farminer said.

"The potential demolition of such a distinctive and resilient community building will be a loss to both the local and wider communities of Dunedin, and we remain optimistic that, with community support and positive dialogue, the Highgate congregation can be encouraged to rethink their approach.''

Southern Presbytery executive officer Alan Judge said the appeal was the first of its kind within living memory, and that the decision process would be handled by the commissioners.

Rev Skilton told the Otago Daily Times the process was out of the parish's hands and was being dealt with by the Southern Presbytery commissioners.

The appeal was not a public meeting, and a report would be circulated once the appeal was considered, he said.