Hopes people 'can' help by donating to foodbank appeal 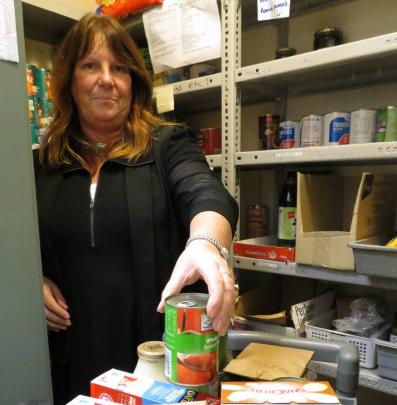 Family Works social work supervisor Debbie Gelling at work in the organisation's foodbank, which is under increasing pressure from people in need. Photo by Brenda Harwood

The annual Octacan appeal is a vital component of the Presbyterian Support Otago Family Works foodbank supply, as ever-increasing demand puts pressure on the service.

The Octacan can drive will be held next Thursday, June 18, from 7.30am to 3pm in the Octagon. Last year's event collected about 13,000 cans and Octacan organisers are hoping to do even better this year to meet need in the community.

PSO Family Works social work supervisor Debbie Gelling said the organisation was bracing itself for an influx of people struggling in the aftermath of last week's flood in South Dunedin.

''There will be big bills coming in for many people, which means they could struggle to afford food,'' Mrs Gelling said.

''We are also hearing of families having extra people staying with them, leading to higher costs and probably huge power bills down the line.''

The PSO Family Works foodbank is operating at capacity, distributing about 9000 food items each month. From January to March, the service worked with 801 people and families who needed immediate assistance, alongside its regular social work services.

PSO marketing and communications co-ordinator Su Anderson said, when the Octacan collection started seven years ago, the food collected could last about six months. Now it would last for about six weeks.

Mrs Gelling said the organisation was working with up to 90 people requiring immediate assistance every week, including 50 to 60 who walked in off the street. For those people, a food parcel was often needed urgently.

Family Works budget adviser and foodbank co-ordinator Maree Buckby said there were many factors behind hardship for people. These could include being unable to get work, or not having enough hours at work, people working full-time on a minimum wage and not able to make ends meet, single parents, people struggling with physical and mental health issues, and people experiencing family violence.

''It could also be something like high rent or a big power bill that can lead to difficulties for people,'' she said.