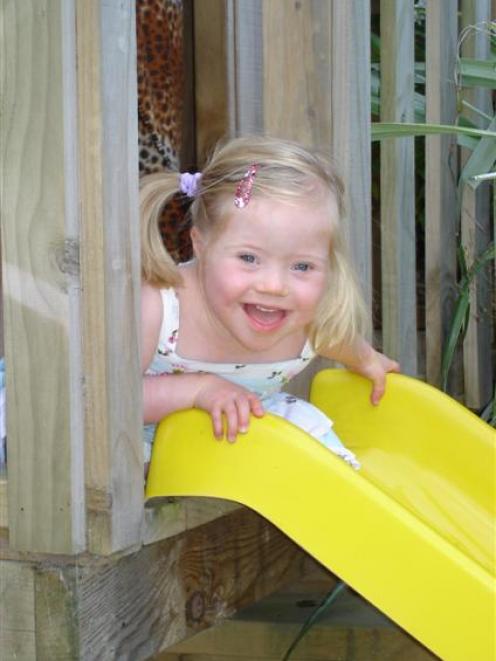 Mollie Kerruish (3) may not mind waiting for her turn on a slide, but hospital waits are not so much fun.
Patients have come to expect long waits at Dunedin Hospital, but if they had to wait for three hours because staff were busy when they went to bank a cheque, would they complain?

Emergency specialist Dr Tim Kerruish laughs at the thought of anyone saying to the bank staff "I know you are really busy, don't worry about it".

But that's what a patient who had waited three hours for 20 minutes' treatment for a cut hand said to him recently.

Such comments were not uncommon.

People were remarkably tolerant and accepting of the service they got at the hospital, probably because they were grateful for the care and the people they dealt with were helpful and kind, he said.

Dr Kerruish hoped the project to improve efficiency being started at the emergency department would reduce waiting times there and eventually throughout the whole hospital.

Dr Kerruish's family knows how stressful waiting can be.

His wife was heavily pregnant with twins when she had to take their daughter Mollie, then 2, for an appointment the day before a day surgery procedure.

She was told to expect a possible long wait. Mollie had to see the the surgeon and the anaesthetist. Both clinicians were popping out between patients or cases.

Some of the people waiting had to go before they were seen.

Dr Kerruish said when Mollie was finally seen after about three hours the staff were fantastic and, like most patients, his wife did not want to be seen now to be complaining.

But it was this sort of instance he hoped might be avoided by staff questioning how they were doing things and whether things could be done better.

He said it was important that this work, based on the Toyota vehicle manufacturer's lean thinking methods, started in the emergency department because almost everyone in Dunedin had some contact with it at some stage, either as a patient or they were involved with a patient.

He hoped the project, which concentrates on reducing waste and getting all staff (not just doctors and nurses) to work together on solutions to problems, would help break down the silo mentality common to hospitals where the relationships between different disciplines were not always good.

People talked about "my patients and your patients, but they are actually our patients", Dr Kerruish said.

He recently found out by chance that patient wrist bands used in the emergency department had to be replaced with water-proof ones once patients went on to wards.

"We didn't know they'd changed them. No-one told us and we hadn't asked."

He was not expecting it to be easy to persuade everybody to become involved, but hoped once people saw improvements in the emergency department that they would become enthusiastic.

That had been the experience in other hospitals where the method had been used.

Dr Kerruish, who comes from the Isle of Man and who has been in Dunedin for eight years, considered the most difficult part of the project would be changing the culture of the organisation and "hard wiring" so staff were always thinking about ways to make sure what they were doing was putting the patients first.

He especially wanted to reduce the time spent on what he called "treasure hunting" (looking for equipment) and unnecessary interruptions which disrupted his patient care.

More generally, he was looking forward to working in a less stressful environment, where people had time to be polite and friendly to each other, and patient care was central, he said.