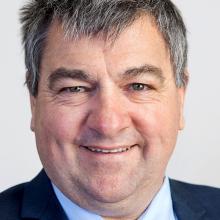 Mike Lord.
A $16,000 analysis on the benefits of keeping a rebuilt Dunedin Hospital in the central business district tells only one side of the story, a Dunedin city councillor says.

The analysis, which will be discussed at a meeting today, was commissioned by the council as it campaigns to keep the hospital in the central business district.

It notes a $21million boost to the city over the seven years of the rebuild, but says no attempt had been made to quantify economic activity of the hospital being built at a site outside the central city.

Cr Mike Lord said yesterday such analyses relied on the question that was asked of them.

Cr Lord said he would have preferred to also discover the benefits of building the hospital on a new site, or somewhere like the former Hillside workshops.

The council commissioned the report into the economic impact of a hospital redevelopment "closely located with the Otago University and CBD retail precinct" in May.Consultant Infometrics was appointed to undertake the work in June.

The analysis said for the central city option, over the seven-year duration of the project, Dunedin’s gross domestic product would be $21.1million higher than it would have been, a 0.4% boost.

It would create 154 jobs, 22 of them highly skilled roles, 98 skilled and 34 semi-skilled or unskilled.

The analysis said redeveloping the CBD site had many advantages, including the retention of 3000 jobs and spending there, supporting local business and property owners.

"On the down side, the current 3ha site is at the smaller end of what is required for a modern hospital. Its scope to expand geographically in future is limited."

While the analysis did not provide economic outcomes for building the hospital outside the CBD, it did discuss "brownfields options" for developing a hospital at Wakari or the Hillside Rd engineering workshops.

"On balance, we advocate Hillside over Wakari."

Deputy Mayor Chris Staynes said the purpose of the report was to compile believable data from experts to feed into the argument that while it could be cheaper to build a new hospital on a "greenfields" site, the long-term impact on the city was significant.

Cr Staynes was happy with the report, which he said helped underpin the council’s argument the Government should not look at just the capital cost of the rebuild, because the impact of moving the hospital "goes on a lot longer".

On the possibility of moving the hospital to South Dunedin, he said that would help the suburb, but "it would have a major impact on the central business district".

He said the analysis would be "offered up" in the argument over where the hospital would be built.

Cr Lord, who voted against the analysis going ahead, said the key thing in such a study was "the question you ask".

If you asked for a report on the benefits of building a hospital in the CBD, "you will get that answer".

"You could equally have asked ‘what are the benefits of a greenfields site’?"

He would also have been keen to find out about the potential benefits of a Hillside Rd site.Cr Lord said he was not against a CBD rebuild, but he wanted the issue left to those investigating the best way forward.

If the council was concerned about what the Government came up with, it could take action once that was clear.

Wherever it was built, there would be implications for somebody.