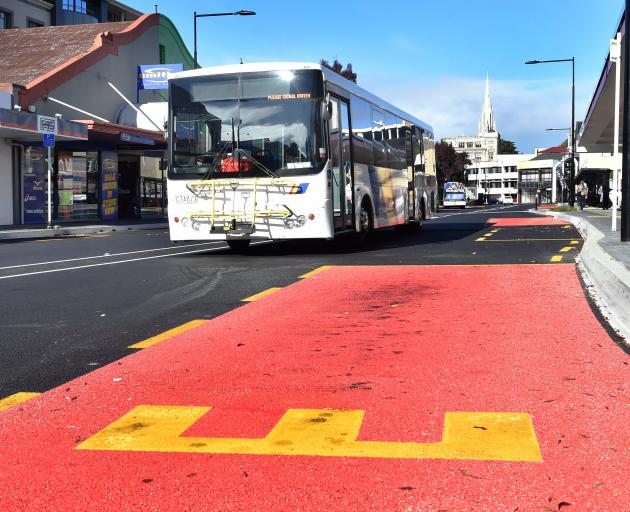 The bus hub in Great King St will complement any traffic changes needed for the new Dunedin Hospital. PHOTO: PETER MCINTOSH
Pete Hodgson, in the final part of a four-part series, looks at the impact a new hospital will have on the city.
The new Dunedin Hospital will cause the city itself to change, both physically and in how we do things. The details of those changes will, in part, be determined by what the public thinks.

One example already in the public consciousness is whether the one-way system should change or not, and if so, how. People have been thinking about these changes for a while, so the hospital is the catalyst of the discussion more than the cause. The NZ Transport Agency and the Dunedin City Council are leading this issue. A full public consultation process will probably get under way soon to test the merits of this or that change. It seems entirely possible that the result will be at least some quietening of the one-way system north, which in turn will alter both the feel and function of the space between George St and the new hospital. The earlier decision to locate the new bus hub into Great King St will complement any change.

The new hospital might also change the city through a larger district heating scheme. The existing scheme runs mostly on coal and supplies heating to the hospital, part of the University, the central fire station and, until recently, Cadbury. It is due for replacement by 2028, when the bigger new hospital building is due to open. It will be fired renewably, presumably with wood chips.

The city council recently began consultation on a major refresh of the central city area, including replacement of the sewer network in George St. So, the logical question is whether we should extend the district heating system down George St at the same time, allowing hotels, shopping malls and civic facilities to replace their fossil-fuel heating with renewable energy.

It all depends on cost and any economies of scale. A feasibility study should answer those questions later this year.

The relationship between the District Health Board, the university and the polytech will deepen further. The catalyst is the Interprofessional Learning Centre, a relatively small building that is likely to sit towards the north of the new hospital campus. All three institutions are working closely together to progress the centre.

The full potential of this concept is still evolving, but the name of the building gives a clue. It will be the place where all health professionals and all health science students can interact, for multiple different reasons. A good example would be its use as a health simulation centre. Lots of teaching involves simulation technologies and so too does continuous professional development for practising professionals. The simulation centre might contain mannequins, a mock ward, a mock theatre, or technologies where the "patient" is in a computer. Simulation technology is moving rapidly and it makes sense for Dunedin to have one premier centre maintained and kept current by all three institutions. Only in Dunedin can that level of co-operation be readily achieved. Christchurch, for example, has two.

However, the Interprofessional Learning Centre will have other functions, such as interdisciplinary tutorials and multiple opportunities for social interaction and discourse. Some academics and health professionals have started talking about new pedagogical practices too. It is something I am unqualified to comment on further other than to say that I detect a future where Dunedin health science students will graduate with a more rounded or integrated perspective. That excites me.

I'm also unqualified to comment on the many changes to the delivery of healthcare. Though such changes are continuous over time, the advent of the new hospital has presented a rare chance to think boldly about what the future might look like. More than 30 staff working groups have done just that in the past year or two, and the hospital design will reflect their viewpoints and those of the primary and community health sectors. One might argue that these changes, amassed, are as consequential as the new hospital itself.

This project is labelled by some as New Zealand's first fully digital hospital, which itself enables healthcare to change. Does that mean my GP will be able to book me a specialist appointment from his office just as he might book a plane ticket, or that I will be identified biometrically when I arrive, or that the outpatients facilities won't need such big waiting rooms because I can be alerted beforehand if there is some delay, or that the lift will automatically take me to the correct floor so I don't get lost, or that my prescription can be managed electronically?

No doubt many of these changes will take time to embed, but the new hospital will be built to accommodate them when they are ready. It will also accommodate countless other digital changes, especially those that lighten the load for staff, eliminate duplication, improve patient safety or increase efficiency.

We can also think of the new hospital as a place where new digital health technologies can be trialled, which opens up new economic opportunities for our city. Dunedin's aspiration to become a centre of digital excellence should be materially advanced by the arrival of New Zealand's first digital hospital.

Pete Hodgson is chairman of the Southern Partnership Group, which is overseeing the construction of the new hospital. Any views expressed are his own.

" It seems entirely possible that the result will be at least some quietening of the one-way system north" where will the traffic go ??? it seems that lately the whole of Dunedin is one big traffic jam whoever is running the phasing of the traffic lights obviously doesn't drive around the city ! we are left sitting at a red light with nothing coming from the left or right.
As for heating with wood chips ...great lets cut more trees down ! What planet are you on Mr Hodgson.