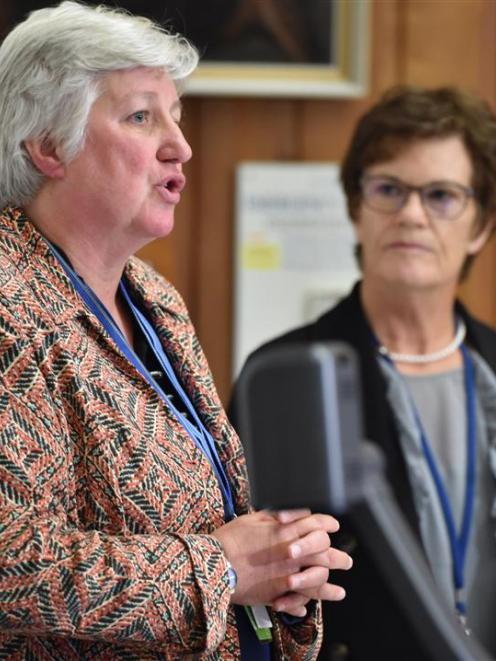 Southern District Health Board chief executive Carole Heatly (left) speaks to media while commissioner Kathy Grant looks on. Photos by Gregor Richardson.
An asbestos find at Dunedin Hospital has forced the cancellation of ultrasound outpatient appointments, closed the mortuary and a central stairwell, and the Southern District Health Board cannot rule out the possibility that pregnant women might have come into contact with white asbestos.

Ultrasound outpatient appointments are expected to resume next Wednesday.

Urgent patients are receiving the procedure in a different part of the radiology department.

The mortuary, and part of the main stairwell also tested positive, and both were closed.

The stairwell would be decontaminated today. Molecular pathology rooms on the third floor were also affected and had been closed.

Those tests were cancelled until further notice, the board said. 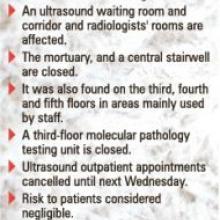 Alternative arrangements had been made for funeral directors and other mortuary users.

Asbestos fibres were also found in several areas used only by staff on the third, fourth, and fifth floors of the clinical services building, in laboratories, clinic rooms, changing rooms and corridors.

No asbestos was present in the air, tests showed.

Swab testing revealed asbestos dust in the waiting area next to the ultrasound suite, in three radiologists' offices, and in a corridor.

Communication over the issue was confused yesterday.

Chief executive Carole Heatly told media at a press conference that patients were unaffected, because ultrasound equipment could still be used.

But a union contacted the Otago Daily Times shortly afterwards to advise that was incorrect, and there was significant disruption, which the board subsequently admitted. 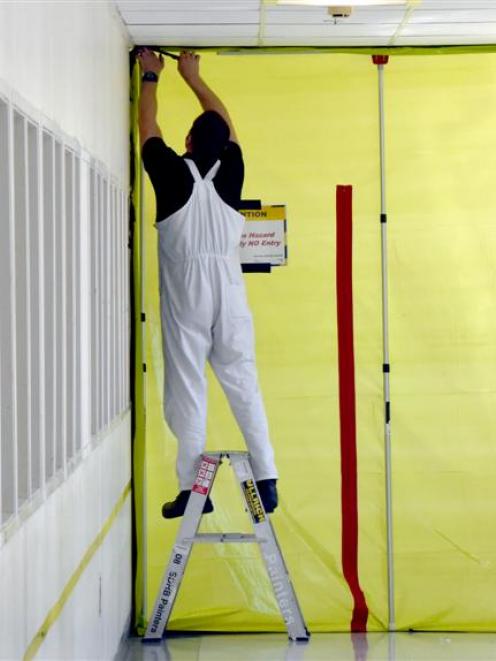 A worker secures screening material to the entrance of the ultrasound suite.
A senior communications manager has been flown in from the Canterbury District Health Board to co-ordinate the board's public response.

Asked if pregnant women could have been exposed while waiting for an ultrasound, Prof McBride said the risk was ''negligible''.

The risk to other staff was very low to negligible, he said.

Ms Heatly said air testing had been done regularly over the past few years.

As far as she knew, swab testing had not been carried out previously.

She said staff were handling the situation well, doing everything possible to minimise disruption to patients.

''My message to the public is we are doing everything we can to manage the risks we are aware of.

''We will continue to test and, if we find any other areas that are positive, we will be really pro-active and we will isolate and close down those areas.''

All the asbestos fibres found were white asbestos.

The clinical services building has to last 10 or more years before it is replaced, and last month the Government granted $7.3 million for urgent deferred maintenance on the rundown building. Asked if that work would now be more expensive, Ms Heatly said it probably would.

Mrs Grant said it was good to have the information so the work could be carried out with due care.

The testing had been routine, carried out to update the asbestos register.

Mr Packer said the asbestos threat was minimal, compared with that posed by the roads or smoking.

''It's less than the risk of getting cancer from alcohol.

''It's less than the risk of getting cancer from consequences of obesity.

''It is a very small risk compared with the other risks that we live with and manage every day.

''For myself, if I were exposed, I don't think it would ever bother me, as I don't expect to be still around in 20 or 25 years. Something else would have taken me,'' Mr Packer said.

The road traffic analogy was also used in a mass email to staff, angering a staff member who contacted the ODT.

The person, who did not wish to be named, said the board should be taking the matter more seriously.

''To use the analogy of being hit by a car . . . I find that that's quite distasteful because it's a very serious matter,'' the staff member said.

Yesterday, Dunedin North MP David Clark said work on the total rebuild should get under way without further delay.

''Hospital staff should not be working in a building that makes them sick and risks shortening their lives, nor should patients and other members of the public be exposed to it.

''Jonathan Coleman needs to explain why he is dragging his heels. Rather than more prevaricating, he must push for the rebuild work to start immediately.''

Dr Coleman was unavailable to respond.