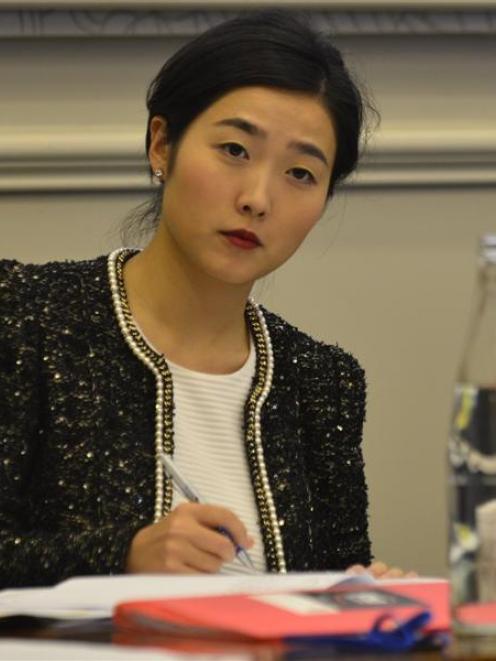 Jing Song. Photo by Peter McIntosh.
The woman behind the controversial $100 million waterfront hotel bid in Dunedin says she will compromise to secure a deal with the Dunedin City Council.

Jing Song said from Singapore she was prepared to reconsider the hotel's design, including its height and possibly its location, if that was what it took.

The building would still need to be economic, and she could not say what changes would be acceptable - or how many floors could be lost - ahead of mediation talks expected to begin in a few months' time.

The ball was in the council's court while the developers waited to hear what they might consider acceptable, she said.

''We will wait for their next move.''

Her comments came after the council's hearings committee this month declined resource consent for the hotel, citing concerns about a lack of information, the hotel's height and the impact on its surroundings.

That prompted an appeal to the Environment Court this week by the company promoting the hotel, Betterways Advisory Ltd, of which Ms Song is a director.

It was expected the appeal would lead to an invitation from the court for parties to consider mediation talks in an effort to avoid lengthy - and expensive - court proceedings.

Ms Song said she remained confident the company's appeal was ''on good grounds'', but was prepared to talk to ''resolve some problems''.

''If it's something we have to do ... we will be keen to work a solution out that tweaks the design, perhaps lowering some of the floors,'' she said.

Dunedin Mayor Dave Cull, asked to respond, said in a statement the council had written to Betterways offering a meeting and independent planning advice.

''Initial discussions between the parties have been positive. No avenues are shut in terms of attracting this investment to Dunedin.''

It was earlier claimed all 27 storeys were needed for the hotel and apartment tower to be economic at 41 Wharf St.

That prompted concern from many of the 507 submitters who joined the debate, most opposed to the hotel because of its height.

Ms Song told the ODT she and her husband, Chinese construction company owner Ping Cao, had taken a week to decide their next move after hearing the committee's decision on June 5.

The announcement came as a shock: ''It's kind of like being kicked out, or rejected, by the place you have grown up in, or are familiar with.

The couple came ''very, very close'' to walking away, but were convinced by supporters to continue the fight in Dunedin - despite overtures to consider other investments instead, including in Auckland.

''I just want to do something for the city,'' she said.

Ms Song studied and worked in Dunedin before moving to Queenstown.

She said the company now wanted to focus on pursuing the hotel project, but it was ''hard to say'' yet if mediation would work.

While a design compromise was possible, the land at 41 Wharf St remained the company's preferred site, she said.

Relocating was possible, and could be advantageous if any new site allowed construction to proceed as a permitted activity, without the need for another consent hearing, she said.

However, a new design would still be needed to ensure the building suited any new site, meaning ''everything will start again''.

Costs were a mounting concern, as the developers faced a substantial - and rising - bill for design, planning, legal and other expenses.

''If the bills keep ticking and the clocks keep ticking ... eventually those costs will pass down to the apartment buyers or the hotel owners.

''It comes down to how economically viable it is,'' she said.