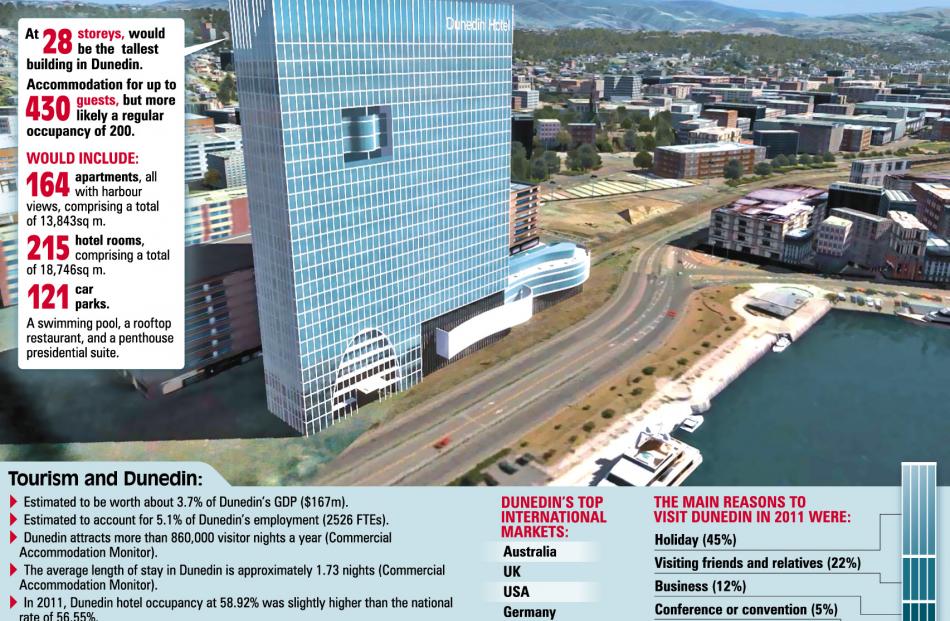 An artist's impression of the five-star hotel planned for Dunedin. Image by Betters Advisory Ltd. Click to enlarge. 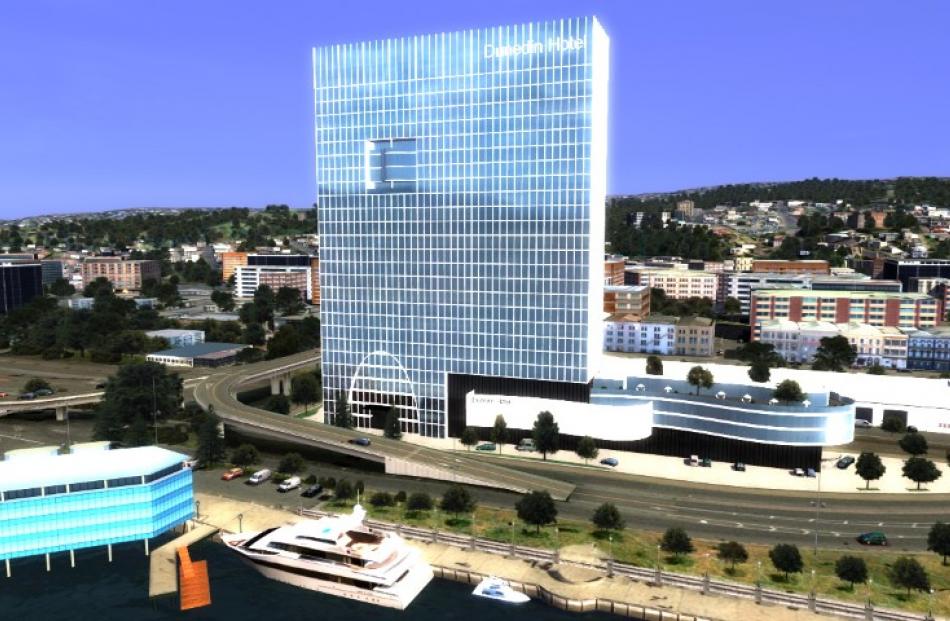 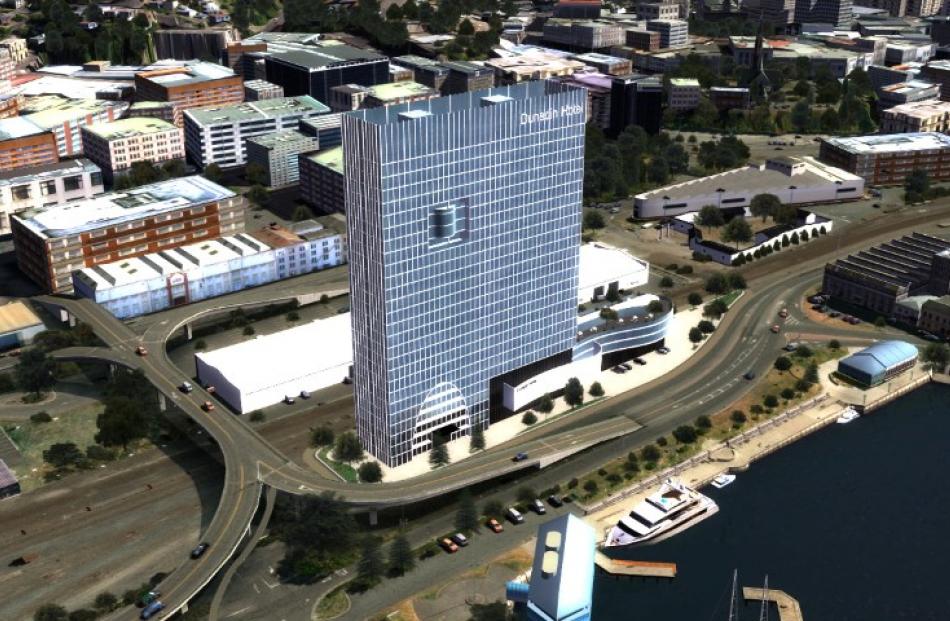 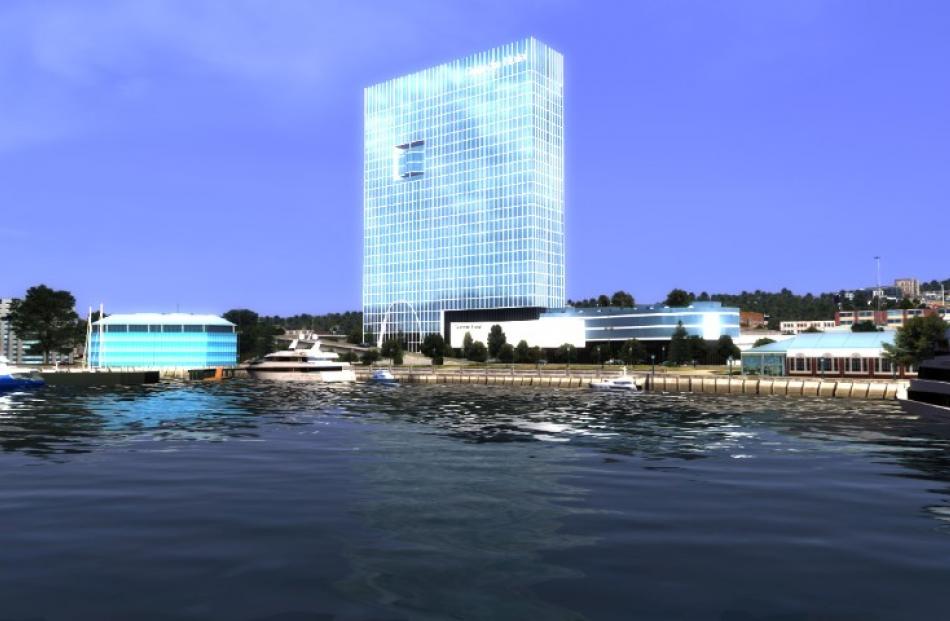 Plans for a five-star, 28-storey luxury hotel were announced for Dunedin yesterday, but the names of the developers behind the $100 million project are not known.

Dunedin lawyer Steve Rodgers is acting for the developers but would not be drawn yesterday on their names or nationality.

Mr Rodgers is the director of Betterways Advisory Ltd, the development company.

The Otago Daily Times understands Asian, possibly Chinese, interests are putting up the money for the project.

The hotel would be part of a branded chain, but the name of the chain was not released.

Mr Rodgers said the names of the developers would be made available when construction started - expected to be early next year.

The hotel, if approved, would be built on the vacant land north of the overbridge, facing the upper harbour basin. Construction was expected to be completed by the end of 2015, he said.

He acknowledged the proposed hotel ran the risk of losing some credibility by not having the backers' names made public, but assured the ODT he had acted for the developers for the past 10 years and said their credibility was sound.

It was likely the developer would self-fund the project but could require some funding from banks.

"The funding for this project is very secure and we have no concerns in this regard"The developer has previously successfully completed the construction of buildings of this size and larger," he said.

In front of a business audience at the Forsyth Barr Stadium, Mr Rodgers said the hotel would position the city as a high-end tourism destination and provide a major boost to the region's economic development.

"There has been a desperate need for a five-star hotel for decades. A five-star will generate an increase in luxury visitor numbers to the region as well as provide a high quality facility supporting conferences and events." There was insufficient accommodation within the city at peak times, he said.

A team of international architects, represented by New Zealand architect Gordon Moller, of Moller Architects, was briefed to design a tall, elegant building with high-quality aesthetics which would be recognised for design excellence.

"This is a game-changer for the city.

The city and the surrounding area will benefit from this development," Mr Rodgers said.

Dunedin Mayor Dave Cull said the hotel proposal showed a great confidence in Dunedin, particularly because the investment was coming from outside the city.

"This proposal is not just 'nice to have'. Four and five-star accommodation has been lacking in the city. It is much needed."

Although there were some consent hurdles, Mr Cull assured the audience council chief executive Paul Orders was prepared to "run out the red carpet, not red tape, in this instance".

Tourism Dunedin chief executive Hamish Saxton said the hotel would provide confidence in Dunedin as a business centre and a destination of international significance.

Otago Chamber of Commerce president Peter McIntyre said the announcement was a huge vote of confidence in the city.

"There will be many flow-on benefits to schools, the university, the polytech, the service sector, engineering and building businesses, greater indeed than any words I can say."

Mr McIntyre expected some people to complain about the site of the hotel and the fact that it could get windy and cold by the harbour. But visitors to Dunedin came for the wildlife and the cultural experience and the hotel would provide top-end accommodation.