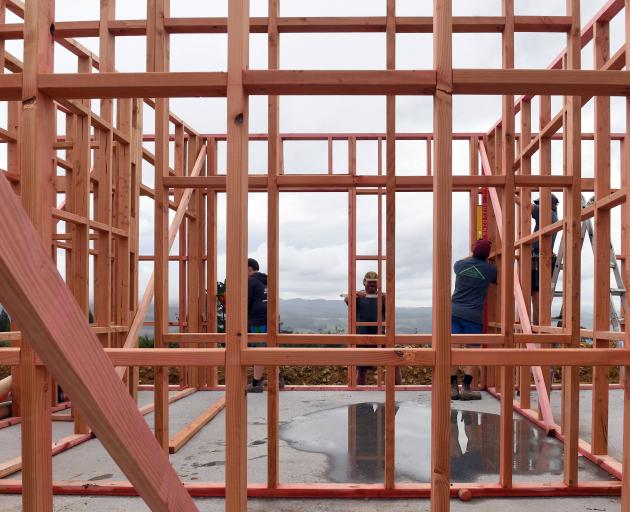 The frames on Keith Campbell’s Blueskin Rd house are erected yesterday by SE Building. PHOTO: STEPHEN JAQUIERY
Dunedin is in the grip of a housing construction boom, more building consents having been issued in the year to October than in nearly 30 years.

Building consents were issued by the Dunedin City Council for 537 new dwellings this year, the most in a 12-month period since 1992 when 540 were issued.

Council research and monitoring team leader Nathan Stocker said the numbers reflected high housing demand and population growth over the past few years, and the market usually took a few years to catch up.

Completed dwellings lagged behind consents granted, and 340 new homes had been built during the year.

Of the 537 consented properties, 335 were for standalone houses, while 140 were for attached units, 59 were for apartments and three were for retirement village units.

The number of attached units was a twofold increase in demand for this type of housing over recent years, Mr Stocker said.

He thought there were two reasons for the growth in this dwelling type.

Firstly, as house prices rose in the city, many buyers were more willing to compromise on the type of house they would consider buying to get on the property ladder.

There was also growth in the city’s over-65 age demographic, who were more likely to be seeking to downsize to a lower-maintenance unit.

There was also a surge in subdivision applications in June, more than 700 lots being applied for, Mr Stocker said.

Some of those applications might not be granted, and it might take some years for the developments to progress from the initial application to completion.

High house prices and strong demand meant there was still a lot of incentive for developers to subdivide land.

And all down to the responsible recovery management of the Labour Govt.