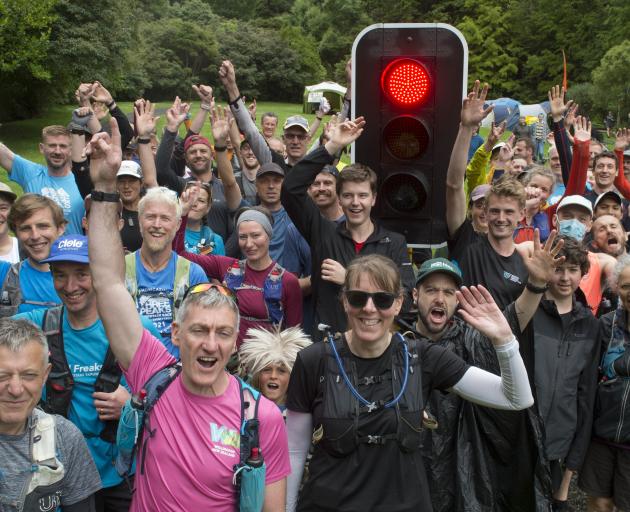 Competitors in Crush the Cargill gather around the Covid-19 protection framework-themed start line before leaving base camp at Bethunes Gully for 24 hours of ascending and descending the slopes of Mt Cargill. PHOTOS: GERARD O’BRIEN
Everything hurts by about lap 15 of Crush the Cargill, the Dunedin endurance race’s founder says.

Steve Tripp not only organised this year’s 24-hour race up and down Mt Cargill, he completed 16 laps, ascending and descending the volcanic outcrop overnight, a personal best.

Runners this year endured six straight hours of rain and muddy track conditions, but good humour and an energising dawn buoyed the spirits of a record number of runners this year.

"Dawn broke as we were going up, but you’ve been going all night and you’re just getting really sleepy and you start slowing down," Dr Tripp said.

"The birdsong was wonderful, but it wasn’t enough to keep you awake."

Runners started at 10am on Saturday and finished at 10am yesterday and collectively the highly competitive field completed more laps of Mt Cargill than ever before, he said.

Led by an enthusiastic canine, competitors start the race.
With 103 human athletes and nine dogs, the event had never had as many participants.

But the Cargill Twig, the trophy awarded to the race winner, was claimed by Brandon Purdue, of Queenstown, who completed 17 laps.

His running partner, Daniel Seres, of Kaikoura, completed 15 laps, but his canine companion had to pull out early.

"Hendrix was a bit upset
that we held him back, but he had a bit of a sore paw," his owner, Eva Seres, said.

The Border collie was one of the better-fed athletes at the race, she said.

Hendrix had been given treats all night and got sausage and bacon in the morning, she said.