Hundreds of Dunedinites packed in the Octagon this evening for a candlelit vigil to mark the Christchurch terror attack and support the city's Muslim community.

A mixture of ages, ethnicities and religions sang together while calling for love and respect in the aftermath of yesterday's horrific attack which left 49 dead. 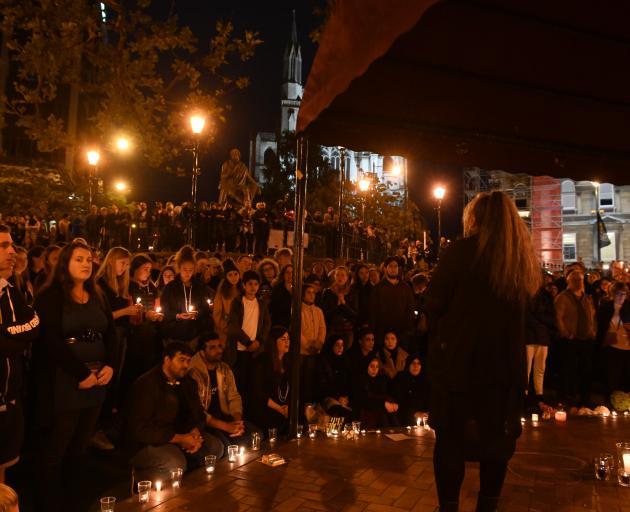 Hundred of people gather in Dunedin's Octagon this evening. Photo: Linda Robertson
Ibrahim Aziz told the crowd he did not plan on speaking but he was overwhelmed by the love and support shown by his fellow kiwis.

A member of the University of Otago Muslim Association told the crowd the city's Muslim community thanked them for all the support and love they had received in the past 24 hours.

"The flowers in front of the mosque, you guys being here it has been absolutely incredible."

"Thank you so so much for everything you have been incredible, we love you we are New Zealand."

In Oamaru, at 7pm the church bells rang at St Luke's Anglican Church after the church filled to capacity for a vigil organised by local ministers and Waitaki Mayor Gary Kircher.

Vicar Andrea McDougall said, like others, she felt "terrible shock" when she first heard the news of the shooting yesterday then "as the day unfolded the news grew worse and worse and worse".

She thanked those for coming to respect the "inalienable right to live and worship in peace" and for rejecting hatred and intolerance. 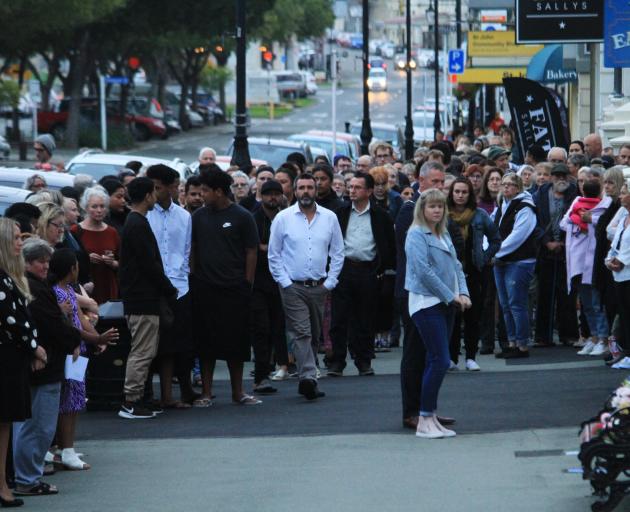 After a short vigil at St Luke's Anglican Church more than 100 people walked down Lower Thames St in silence this evening. (March 16) PHOTO: HAMISH MACLEAN
Mr Kircher said it had been an emotional 24 hours and he thought as well of those "who rushed in to help others". The turnout proved "we are a caring community".
"It was a tough time but I thought this does not define us. How we react defines us."

Candles, passed out as people entered the church, were lit and taken to the alter and many then walked down Thames St to the Oamaru courthouse.

There was also a call for all Dunedin residents to gather at the Al Huda Mosque in Clyde St at 2pm tomorrow so the city's Muslims could again pray in their place of worship without fear.

Jamie Stodler of Arrowtown said she and her friends had come to the vigil to show support and love.

"I'm an immigrant to and I just wanted to come here and show them we love them and will support them."

Another vigil is planned for Thursday in the Octagon at 7pm.