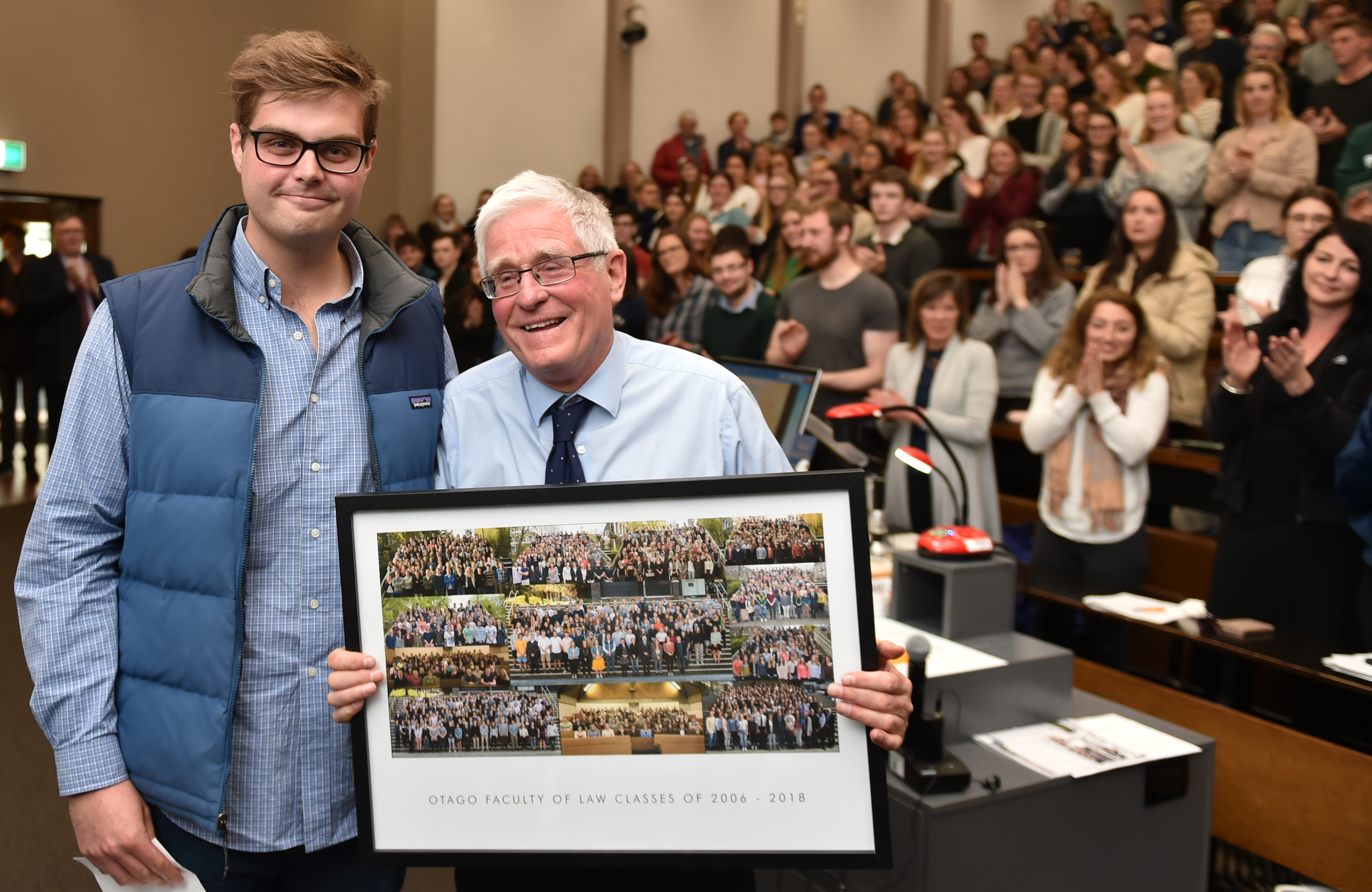 Law student Tim Austen presents lecturer Prof Mark Henaghan with a board of finalists' pictures through the years. PHOTO: GREGOR RICHARDSON
Family law specialist and former law school dean Prof Mark Henaghan was officially farewelled by students yesterday - but says he will be back, to attend graduations of all the people he has taught.

Hundreds of students turned up on campus to say goodbye to the colourful academic who is leaving at the end of the year to take up a position as a lecturer at the University of Auckland.

He ended his final family law lecture at Otago yesterday morning in typically flamboyant fashion, complete with an imitation of Dory the fish from Finding Nemo as he instructed students to "just keep swimming".

Prof Henaghan, who estimated he had taught between 30,000 and 40,000 students, said he loved the city and intended to visit Dunedin for future graduations.

After reading an excerpt from The Happy Prince yesterday and delivering advice to his class on the importance of collegiality, being "tough on the issues and kind on the people", a tearful Prof Henaghan received a standing ovation.

Faculty members then streamed into the lecture theatre to farewell him, with dean Prof Jessica Palmer and Society of the University of Otago Law Students' (SOULS) president Tim Austen delivering speeches.

Prof Henaghan was given flowers and photographs, and was made SOULS' "first and only" life member.

"I feel a bit overwhelmed by it really; they've kept it a secret from me," Prof Henaghan said.

The farewell was "fantastic", although he had hoped his students would be in the library studying.

About 500 students formed a "guard of honour" for Prof Henaghan as he walked from the Archway 4 Lecture Theatre to the university's Union Hall.

At the union hall, students performed a song for him to the tune of Cecilia by Simon and Garfunkel.

The motivation for his move was to spend more time with family, including his young granddaughter, Prof Henaghan said.

Prof Henaghan stepped down as the dean of the Faculty of Law earlier this year, after holding the position for 19 years.

His decision followed reports of nudity and jelly-wrestling at the SOULS law camps, at which he was a guest. However, he said his resignation was unrelated.

A draft review of the camps by Dunedin barrister David Sim has already been presented to the university, and an update on the progress of the review is expected next week.