I have loved my year here: student leader 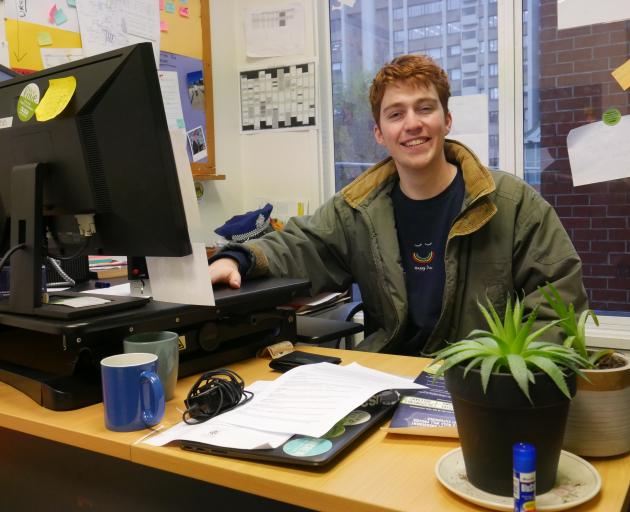 Otago University Students’ Association president James Heath.PHOTO: JESSICA WILSON
Otago University Students’ Association outgoing president James Heath is feeling bittersweet about leaving his role. While he has loved the past 10 months, he is looking forward to embracing new opportunities and diving into further study. The Star reporter Jessica Wilson sat down with him to reflect on his proudest and most challenging moments.

Mr Heath will stand down from the role on December 14, a "bittersweet'' feeling after a full-on year.

"Part of me would love to stay around and keep working here, but I'm also looking forward to new opportunities and having more of a chance to look after myself.''

When The Star interviewed him last year, Mr Heath said he aimed to make the association more political, something he now felt he had achieved.

He was pleased with the association's local body elections campaign, and submission on bills and Dunedin City Council plans. Students also marched alongside secondary school pupils in the School Strike 4 Climate.

"This year we've really stepped up OUSA [Otago University Students' Association] in terms of being a political organisation and I'm pretty proud of that,'' Mr Heath said.

He was looking forward to seeing the progress made by next year's executive, especially with the New Zealand general election set to be held in November.

"It's a really important time for OUSA to again show why they're a political organisation and why engaging students is so important.''

Mr Heath said although he had a fair idea of what the president's job entailed when he put his hand up for it, there were unexpected challenges this year, including the Christchurch terror attack and the death of second-year student Sophia Crestani at a flat party.

But he was proud of the students and the strength they showed after the tragic events.

"It was actually a real privilege to play my part in leading the student community after those acts,'' he said.

"We had some pretty rough patches for our community this year but what I take away from that is actually how strong our community came out after it.

"I'm pretty proud of our community.''

He enjoyed the experience of being president, the people he worked alongside and met, and the work he had done.

Although Mr Heath will leave the association, he will still be seen around the University of Otago campus studying for a Master of Politics degree.