By Elena McPhee and Chris Morris
10 Comments
University of Otago proctor Dave Scott has acknowledged he was wrong to enter a flat while no-one was home and confiscate bongs, but says he doesn't think his actions make him a criminal.

In a press conference this afternoon, Mr Scott said with the "benefit of hindsight" he was wrong to go into the flat three weeks ago and would not make the same mistake again.

"I'm a human and I have made an error of judgement on this occasion [and] I've apologised to the flat in question this afternoon for what I did.

"I have made a mistake here and I am willing to learn from it." 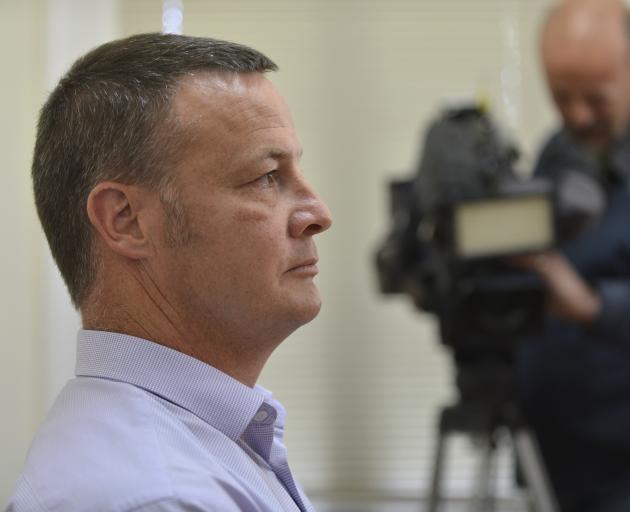 University of Otago proctor Dave Scott apologises at a press conference this afternoon. Photo: Gerard O'Brien
Mr Scott said he had the best interests of students at heart and was trying to deal with the situation without involving police.

Asked if he broke the law, he said he was not above scrutiny and acknowledged he was wrong.

"Does that make me a criminal? I don't believe so.

"This was a situation that could have been dealt with differently."

Vice-chancellor Prof Harlene Hayne said the university still had "full confidence" in Mr Scott, saying he had assured her he would not repeat the mistake.

"I have discussed the proctor's actions with him and he agrees this will not happen again.

"In my experience of the proctor on so many occasions he always has the students' best interests at heart, and has worked extremely hard to ensure students are treated fairly while they are here."

She added the university remained a place where students could "spread their wings in a safe and supportive environment".

"In doing that, we recognise the fundamental importance of respecting students' rights."

Meanwhile a petition on Change.org, created by OUSA recreation officer Josh Smythe, included a call for Mr Scott to resign and a demand for "an official condemnation of his methods from the University of Otago''.

By mid-morning, the petition had attracted nearly 400 signatures.

"The proctor should be actively cultivating positive relationships with the communities he is supposedly stewarding, as opposed to engaging in intimidation and antagonistic power plays.''

This morning Abe Gray, a former student politician, cannabis activist and the curator of the Whakamana Cannabis Museum, said he had been offered a $25,000 grant from an anonymous donor to help pay for a legal fighting fund.

The money could pay for a private prosecution aimed at Mr Scott or the university itself, but the exact course of action was still being considered, Mr Gray said.

The proctor's "vigilante'' behaviour was well outside the scope of his role, and Mr Gray had offered to replace the bongs.

The university stands by Mr Scott's decision, but said the action would be unlikely to be repeated.

The incident, which happened about three weeks ago, was reported in student magazine Critic Te Arohi yesterday.

In a statement, the university said Mr Scott, a former Dunedin police senior sergeant, was in the Leith St North area delivering letters warning students of the dangers of initiations when he saw several bongs left out in plain sight and confiscated them.

The claim that the seizure was his judgment call for the student's benefit then ignores this: STUDENTS SMOKING WEED IN THEIR FLATS IS NONE OF THE UNI'S BUSINESS!!! As the Student Code of Conduct does not apply to such purely private behaviour, the Proctor has no interest here. /2— Andrew Geddis (@acgeddis) 24 September 2018

A university spokeswoman said neither the proctor nor the university claimed a right to search private premises.

''What was done here was unusual and unlikely to be repeated.''

Auckland University of Technology senior lecturer in criminal law Khylee Quince said she did not think the events outlined in Critic would amount to burglary - because Mr Scott did not have the intent to commit an offence when he went into the building - but she thought the proctor could potentially be responsible for both theft and unlawfully being in a building.

University of Victoria public law lecturer Eddie Clark said there appeared to be no legal justification for the proctor going on to the property.

''There's nothing I'm aware of that makes it lawful.''

Mr Scott judged the occupants of the flat would rather deal with him informally than have the police search the flat, so he decided to enter the flat and take the items.

The flatmates were told of what happened and the matter was resolved in a way the university was confident was to their advantage.

The bongs, which the flatmates acknowledged had been used for consuming illegal drugs, were destroyed.

''The proctor is often called on to make judgements as to how to manage difficult situations and in doing that he gives careful thought to the interests of students involved.''

Southern District police area prevention manager Will Black said police were ''aware of an incident, though we have received no complaint at this time''.

''Anyone with concerns should get in touch with their local police.''

When asked whether the circumstances described would amount to burglary, a police spokeswoman said complaints were dealt with on a case-by-case basis.

He said students would be holding a protest about it on Friday at 1pm.

Due to the situation being a ''grey area'', Mr Smythe did not believe any of the students had made official complaints.

Critic ran a story on a second flat of students yesterday afternoon, who claimed that the proctor visited them in June when no-one was home, to pick up rubbish.

They said while he was there, he took two bongs, which had been sitting in the lounge, around the back of the flat.

The university hit national and international headlines in May when hundreds of copies of Critic's ''menstruation issue'' - featuring a naked woman menstruating on the cover - went missing from stands around the university campus overnight.

They were removed by a member of Campus Watch, and the university later described the person's actions as a mistake.

This proctor appears to have learnt nothing from his previous authoritarian burp. That the university continues to keep him on speaks volumes.

Many students at Otago university have learnt nothing about how to behave in Dunedin. Residents and ratepayers have had enough of their loutish behaviour which needs authority to control and pay for just as the university and society itself does.

Can't believe this foolishness. Calling the police or taking the law into his own hands were not the only available options. Why is he even roaming around on private property. He needs to resign, the Uni needs to take some action on this.

Thousands of Dunedin ratepayers do not want the proctor to resign. He is doing a great job as far as we are concerned. The university are lucky to have him and so is Dunedin. Ratepayers rule, not drugged and drunken students.

It's irrelevant what ratepayers want or whether he is doing a good job as a proctor and I don't if care if he resigns or not. I'm good at my job, that doesn't mean I'm above the law. He was in the flat illegally and as a former police office he should have known better.

Several people have been charged in Dunedin this year for various break and enter or intention to break and enter charges. Notably in the university flats areas.
If I walk down a street, knock on doors and just enter empty homes I will likely face criminal charges.
An ex policeman should understand the legality of that. I don't care what pompous title the university have attached to this bloke, his actions are simply unacceptable and he needs to go.

Maybe this is why he's a "FORMER Dunedin police senior sergeant". Hopefully he can become a former proctor.

The Proctor acted responsibly and should be applauded, then maybe trained on how to handle this better.
Would the tenants perhaps have preferred the cops to pop round with some sniffer dogs, so they can have a drug conviction before they even graduate?
Of course they didn't call the Police, what would they say? "Hi, someone stole our bongs"?
Marijuana will be illegal until it's not...until then they should be thankful he didn't call the cops!

Oh the humanity - that someone should care enough to try and help these kids. How dare he!

(Probably should have just reported it, letting the police organise the bust, and subsequent prosecutions).

It beggars belief that he's got away with this. If anyone other than a university staff member was wandering into flats unannounced and removing items, the university would condemn it. Such hypocrisy to pretend it wasn't unlawful behaviour.